Showing posts from November, 2007
Show All

Director of football David Malone confirmed the Spitfires had made "quite a substantial offer" to their Blue Square South rivals, but it was turned down by his opposite number Derek Pope at Westleigh Park.

Given that Eastleigh have already wooed away the Hawks' manager Ian Baird this season, Malone was not surprised by the Hawks' response.

"If I was in their position I would probably have done the same," he admitted. "For one thing Tom is a decent player and, for another, I doubt they would want to do anything to help Eastleigh.

"Popey's actual response to me was that Tom Jordan is not for sale, but they'd consider a straight swap for Andy Forbes and Luke Byles!"

Bristol-based Jordan, a commanding 6ft 5in centre-back, joined Havant at the start of 2004/5 and was made club cap…
Post a Comment
Read more

Watts out for the season

The latest bombshell dropped on Ian Baird's side is that frontman Steve Watts has been ruled out for the rest of the season with knee damage.

It's been one problem after another for the former Leyton Orient striker. Having had a lengthy spell out following a cartilage operation in August, he had to have a cyst removed from behind the same knee.
He marked his comeback by going on as a substitute and scoring against Forest Green Rovers in the FA Cup late last month but has been struggling on the sidelines ever since.

"No one's been able to diagnose what's wrong with the knee, but it turns out I've got a hole in it and I've got to have microfracture surgery in two weeks' time," he revealed.

"Good draw.
Can definitely beat Bognor, if we do I believe that will be the 1st time in history we've got to the last 32 of the Trophy.

FA Challenge Trophy - 3rd Qualifying Round
A depleted Eastleigh squad owing to several injuries, saw the Spitfires put in a strong performance to earn their third victory over the Seagulls this season and with it, a place in the next round of the FA Trophy.

17-year old goalkeeper Ross Kitteridge, who is on loan/work experience from Reading - was the man between the sticks today for his Eastleigh debut following James Pullen’s midweek ankle operation.

Meanwhile, Danny Smith came into the centre of defence as skipper, Fitzroy Simpson made his home debut starring in the centre of midfield alongside the equally brilliant Jamie Brown (back from suspension), who replaced David Hughes.

A bright start from the hosts saw Matt Hann extremely lively early on down the right, whilst Damian Scannell was at his best also with excellent running, skill and hold up play in attack.

Holgate on his way

Ahead of our FA Trophy game with Weston-Super-Mare on Saturday, it would appear Eastleigh have signed striker Ashan Holgate from tomorrow's visitors to the Silverlake Stadium.


ASHAN HOLGATE - On his Eastleigh debut against Braintree Town - 01/12/2007
"We (Weston-Super-Mare) have sold Ashan Holgate to Eastleigh Football Club. Eastleigh made an enquiry about him 10 days ago; we didn’t want Ashan to go but through personal reasons, in the end, it was in the best interests of Ashan that he moved to Eastleigh. Ashan is a player for the future; he’s still only 21 years of age, we’ve got a sell-on clause, if he moves on again.

Once he becomes a bit more consistent I think he will be a Football League player – his presence is immense and he’ll he sadly missed here at Weston super Mare Football Club.

It’s the best move for Ashan Holgate – we’ve only had him a short space of time, and we’re sad to see him go but we wish him all well and if it doesn’t work out for him he’s always welcome b…
Post a Comment
Read more

End of an era for Rob

Click image to read the article in full size

GOODHIND SIGNS FOR EASTLEIGH
Eastleigh have captured the signing of Warren Goodhind from Blue Square Premier side Ebbsfleet United. A press release on the clubs official website - http://www.eastleigh-fc.co.uk, confirmed the details:

"The Club are pleased to announce the signing, initially on a one month loan basis, of Central Defender Warren Goodhind (30) from Ebbsfleet United. South African born, Warren has previously played at Barnet, Cambridge United, Rochdale and Oxford United.

In view of our current injury situation, we are also in negotiations with another player and we are hopeful of concluding matters early next week. We will issue a further statement in due course."
Post a Comment
Read more

Eastleigh’s only two previous visits to Milton Road, Cambridge had both brought defeats. The home side opened the scoring after seventy-six seconds in this affair but Eastleigh fought back to earn a deserved draw.

The Eastleigh squad was pushed to its limits. Andy Harris and Paul Sales were both suspended but also unavailable through injury whilst Jamie Brown was also serving a one-match suspension.

Karim El Salahi was nursing a groin injury which saw the defender only last the first forty-five minutes. Manager Ian Baird gave a debut to new signing Warren Goodhind from Ebbsfleet United, the former Cambridge United, Barnet and Rochdale defender, started the game in a right back role before moving to his more accustomed central defensive role at the interval allowing Danny Smith to come in to the game at right back.

Starting with a formation with Andy Forbes being a lone striker, the home side attacked Eastleigh from the kick off. Antho…
Post a Comment
Read more

Eastleigh's second eleven were on course for their second win in the week following their 2-1 victory over Fleet Town on Monday night, but an abysmal display from the referee ultimately stopped them from securing all three points.

The first half was very even and in the opening stages neither side could really break each other down.

TJ McClory-Cuthbertson had a shot heading towards goal diverted by the man with the whistle on 11 minutes, in a move that saw good passing in the build up.

Win for Reserves but it's Bad News for Chris Collins

With three wins in their last four, Eastleigh's reserves have climbed high up the table to within touching distance of the top.

It started off badly for first team defender Chris Collins who played just 24 minutes before pulling his hamstring. Very bad news at a time when injuries are adding up by the day. The centre back was chasing a ball to the touchline from Rink when he went down clutching the back of his leg on 19 minutes.

Whilst Eastleigh went down to ten men temporarily, Collins was determined to ge…
Post a Comment
Read more

Fundraising Event - Your Chance to Meet the players of Eastleigh Ladies FC and show your Support!

Blue Square South
Eastleigh’s fantastic run of late today came to a shattering end following a dismal display at the hands of a well-organised, hard-working Bromley side.

October was a month, which saw Ian Baird win the manager of the month accolade for the Blue Square South. Three wins and a draw in the league, including the 3-0 demolition of a previously unbeaten Lewes, not to mention the club’s best ever cup run in history in a congested month of football.

This was then built on with the comprehensive 4-2 away win over Hayes & Yeading United last weekend as we know, but few could expect the outcome and the performance we witnessed this afternoon.

The visitors came into this game having suffered three defeats in their past four games but put this right behind them with a convincing win against an unusually lacklustre Spitfires side.

Adam Everitt was finally able to make his home league debut having been cup tied and suspended previously,…
Post a Comment
Read more 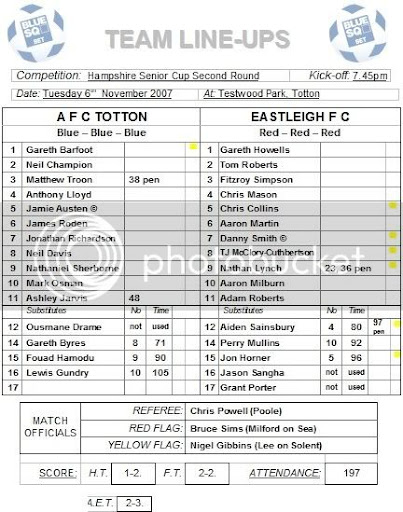 Eastleigh progressed in the Hampshire Senior Cup with a win against last year’s FA Vase finalists Totton, with in the main, a reserve side.

Gareth Howells and Fitzroy Simpson made their debuts with both Danny Smith and Chris Collins gaining invaluable match fitness to help bolster the youthful side.

Youth-product Nathan Lynch scored twice before Aiden Sainsbury ensured the win in extra time with a late penalty to see Eastleigh through to the last sixteen and a place in the quarter finals.

Eastleigh's very own Ian Baird has been awarded the Blue Square South Manager of the Month award for October having seen the Spitfires on an excellent unbeaten run in the league.

The winners in full are as follows:

Blue Square Announce "Manager of the Month" Winners for October


Histon boss Steve Fallon has won the Blue Square "Manager of the Month" award for October. The Stutes won three of their four games during the month, recording two away victories at resurgent York City and fellow Blue Square Premier newcomers Droylsden. Fallon has guided his part-time team to within touching distance of the play-off positions following last year’s promotion season.

The award is judged by a panel of experts including Setanta Blue Square Premier pundit Paul Parker. Parker had this to say about Fallon: "The fact that Histon can see full-time teams like Exeter, York and Oxford below them in the table shows what a fantastic job Steve Fallon has do…
Post a Comment
Read more

It looked as though Eastleigh may not have another home game until December but, what would have been a free Saturday on the 10th November - has now been filled.

Director of Football Dave Malone commented on the club's messageboard:

"The Blue Square League have insisted that we play a League game this Saturday (10th November), against Bromley (ko 3.00pm).

Although we were hoping to rest some of our injured players, the game will give us an opportunity to continue our recent run of good League form.

Come along to this top of the table clash, and bring a friend with you too!"

We now also have a home game two weeks later (Saturday 24th) in the FA Trophy with the draw producing a home tie against Weston-Super Mare. Click here for the draw in full.
Post a Comment
Read more

Though Eastleigh had visited Church Road, Hayes twice previously, this was the first time that they had visited the ground under the guise of the newly merged Hayes & Yeading United. The two previous trips had never seen an Eastleigh victory. This time Eastleigh earned a highly deserved victory, the only disappointing outcome of the afternoon was conceding two goals in the last ten minutes as they were coasting to victory.

The home side were on a run of seven league games undefeated, whilst Eastleigh were patching together their side following their midweek FA Cup exit at Forest Green Rovers. With Matt Hann and Karim El Salahi both passing late fitness tests, the FA Cup tied Adam Everitt came in to the side to fill his normal left back role with Chris Piper moving up into midfield allowing Damian Scannell a striking role and David Hughes returning to the midfield with Anthony Riviere and Paul Sales both dropping to t…
Post a Comment
Read more

Since the 6-0 thrashing of Burgess Hill at the beginning of October, Eastleigh's second string have had a mixture of results with a 3-3 draw away to Metropolitan Police, before crashing out of the Southampton Senior Cup going down 1-3 to Bush Hill. Last weekend the youngsters got back to winning ways with a 2-1 victory over Harefield United with Tom Price netting both goals.

Today, Eastleigh were up against Wealdstone and after surviving early pressure from the visitors - went on to record another impressive win.

Inside thirty seconds, goalkeeper Grant Porter was called in to action to deny the Wealdstone centre forward who…
1 comment
Read more
More posts