Showing posts from October, 2006
Show All

Eastleigh not only beat the league leaders today, but won their first league game since their 1-0 win over Sutton United back in September. It was also the first time they have ever won against Histon having lost twice against them last season. Andy Forbes continued exactly where he left off last week where he scored a fine hattrick at Weston, with another quality finish that proved to be the winner.

Changes from last weeks side included new goalkeeper James Pullen, formerly of Ipswich Town, who replaced Wayne Shaw between the sticks. Peter Castle and Ian Oliver were both left out with Liam Green starting at left back and Martin Thomas returning to the side having now agreed to stay on at the Silverlake Stadium.

It was Histon who had the first chance of the game in the third minute; with Eastleigh’s new boy James Pullen spring into action. Adrian Cambridge whipped the ball in from a left sided free kick that evaded a numbe…
Post a Comment
Read more

- October 27, 2006
Martin Thomas will now be staying at the Silverlake Stadium, after previously it was thought the no-nonsense utility player would be on his way out. Paul Doswell clearly values the player and an agreement has thankfully been reached.

Both Brian Dutton and Adam James have been released from their contracts with immediate effect. We would like to thank them for their efforts and wish them every success in their future.

On a more positive note, James Pullen, 24, has completed his move from Fisher Athletic. James has previously played professionally for Ipswich Town, Blackpool and Southend. The young keeper was also at Dagenham & Redbridge in 2003. Last season he helped Fisher gain promotion to the Conference South, before then he was at Gravesend in the 2004/2005 season.

Wayne Shaw has accepted an offer to become the Club's Head Goalkeeping coach, and will not only be involved with the senior keepers but also the youth and tyro goalies at Eastleigh as well.

Forbes treble but only 1 point

An afternoon of fluctuating fortunes for both sides, both on the park and on the weather scene. From shielding your eyes in the blazing sunlight to hiding from the torrential rain, Eastleigh led three times before finally having to concede two points away from home.

For only the second time this season, Eastleigh netted more than one goal in a league fixture, but shortcomings on the defensive side of their game at the moment only saw the side pick up one point. Pete Castle came into the side for his debut whilst Steve West was given a central strikers role, one he was used to before being switched to a defender, but he led the Eastleigh line well at Weston. David Hughes also returned to the side following suspension. Bertie Brayley, Adam James and Liam Green making way from the sides previous game with Salisbury.

The afternoon started well. Only five minutes had been played when Jamie Brown won a chal…
Post a Comment
Read more

Goal fest for the Ressies!

Eastleigh cruised into the next round of the cup running out 14-nil victors brushing aside Netley Central. Goals coming from Karim Hraiba (4), Brett Williams (4), Zach Glasspool (5) and Lewis Hunt (1).

After having an early chance slip by from Brett Williams, Eastleigh went ahead on 10 minutes. The goal started from a quick throw out from Grant Porter to Phil Cousens, the ball was then worked between Adam Roberts and Zach Glasspool with Taz forcing a corner with the return pass. From it, KARIM HRAIBA smashed the ball home from the edge of the area with a fantastic strike.

Sales back to haunt Eastleigh in FA Cup

Former Eastleigh striker Paul Sales, came back to haunt the Spitfires as his 61st minute strike was enough to send Salisbury into the next round of the competition with Eastleigh’s cup run coming to an abrupt end.

The tie began explosively with Jamie Brown smashing against the underside of the bar after just one minute. Liam Green, who has now returned to the Silverlake Stadium from his loan spell at Dorchester, picked out Brown as Whites centre half Tim Bond slipped giving the Eastleigh striker time to chest the ball down and fire at goal. Salisbury were let off as the effort came back off the bar before being cleared off the goal line.

In the very next minute Andy Forbes came inches wide with a left foot strike, latching on to Danny Smith’s through ball.

After this exciting start from Eastleigh, both sides began to get sloppy in particular with the final ball as neither side could find a w…
Post a Comment
Read more

Clearout continues but Beck's back!

- October 13, 2006
Brian Dutton is the third outgoing Spitfire to leave this week joining both Martin Thomas and Ryan Ashford, who the club have also parted company with.

The former Weymouth midfielder that joined the club in pre-season along with Conference South winning teammates Darren Wheeler and another Eastleigh casualty Matt Bound, made just 6 starts for the club scoring one goal (against Sutton United).

Returning to the Silverlake Stadium is Martin Beck, son of Chief Scout Steve, who has rejoined the club to link up with manager Paul Doswell once more. Beck, 26, was part of three promotion campaigns with Eastleigh including the 2004/2005 season which took Eastleigh to the Conference South from the Ryman Premier.

Martin moved on to Lymington and New Milton in July 2005 but was out for months with a broken leg sustained in a pre-season friendly. The pacy left sided player had an extended trial with Southampton in 2004 and has previously played for both Bashley and Winchester City.
Post a Comment
Read more

- October 11, 2006
Eastleigh loanee's Adam Roberts and Jack Smith have been recalled by manager Paul Doswell due to the current injury crisis, this news also follows the departures of both Martin Thomas and Ryan Ashford. Originally, when the pair went out on loan in July, it was thought they would stay for the season.

Last night, both of the youngsters marked their return to Eastleigh with a bang as they played their part in a 6-1 demolition over Brockenhurst in the Hampshire Senior Cup. Taz netted twice with two good finishes and Jack looked as reliable as ever at right back. Welcome back to the Silverlake Stadium.

According to today's Daily Echo, Andy Harris will be staying at Eastleigh permanently following on from his loan spell.
Post a Comment
Read more

A combination of Eastleigh's first team and reserves comfortably saw off Brockenhurst who are three leagues below the Spitfires. The difference was very evident as Eastleigh made their quality count as Danny Smith led the way with the opening goal on 33 minutes. Young striker Zach Glasspool netted two in the last five minutes of the first half before completing his hattrick moments into the second 45. One minute later Adam Roberts, who was back from Andover for the night along with Jack Smith, scored the fifth and sixth with Brock netting a consolation.

Phil Cousens, formerly of QPR's youth setup, had a commanding game in the middle and impressed on his first appearance for the first team. Bertie Brayley was another that shone but despite giving the Brockenhurst right back a horrid time down the left flank for Eastleigh, he could have easily had a hattrick.

Eastleigh's everchanging squad takes another twist and turn with both Martin Thomas and Ryan Ashford going their separate ways.

Having spent a number of seasons with the Spitfires including being part of promotion to the Conference South, the versatile never say die attitude of Thomas will be sorely missed along with the talented Ashford who always did his best for the team scoring some memorable free kicks. It is thought that the latter has signed for VT FC.

Meanwhile, with these two outgoings, the club are pleased to welcome Peter Castle, a 19 year old centre half from Staines. Eastleigh's latest addition made his first team debut for Reading at just 16 coming on as a sub in a 3-0 win against Watford.

The 6"1 defender stayed with the Royals until the end of the 2005/2006 season but had loan spells with St. Albans and Rushden & Diamonds in between.

This summer he moved to Staines of the Ryman Premier. Castle's career began with six years at Bournemouth…
Post a Comment
Read more

Eastleigh yet again, start brightly but are made to look very ordinary at best by a Yeading side that looked good going forward and made the most of their chances – something that the Spitfires failed to do. This result now sees Paul Doswell’s side languishing at the foot of the table with just nine points on the board from 12 games with a bare three points separating them from being rock bottom. To make matters worse Eastleigh have now played a game more than most other teams and so could find themselves sink even lower once those around them have played their game in hand.

Other than Jamie Brown and debutant Steve West, who looks set to become a sound acquisition for the club, there was very little else in a match that saw Eastleigh dominate the opening twenty five minutes, with Yeading barely getting a sniff of the ball. Davis Haule made the most of some sloppy defending as he stunned the 700 plus crowd at the Silverlake …
Post a Comment
Read more 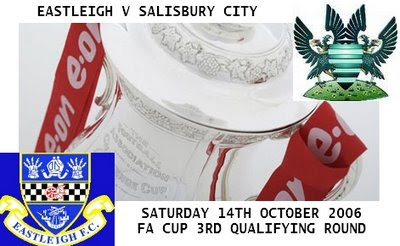 After miraculously turning around the game against Gloucester City last weekend, the Spitfires have been drawn against local rivals Salisbury City.

The FA Cup 3rd round qualifying tie against the Whites will be played at the Silverlake Stadium on Saturday 14th October.

It will be interesting to see how many cool heads there will be after a somewhat heated encounter at The Raymond McEnhill Stadium just one month ago. Salisbury manager Nick Holmes has already described the tie as "World War 2 coming early", meaning he was expecting the next league game between the two clubs in January to be the next time they meet. Whilst Eastleigh's assistant manager Mark Dennis believes that even without the suspended Francis Benali, Martin Thomas and David Hughes, the tie will be suited to Eastleigh.

In other news, on loan Weymouth midfielder has extended his stay at the club having impressed during his one month spell and has joined Eastleigh on a permanent basis.