Showing posts from November, 2008
Show All

Ian Baird stuck with the same side that won their second successive win away from home in the league against Team Bath in midweek against his former charges.

The hosts exerted the early pressure with one of several former Hawks in the Eastleigh line up, Tony Taggart drilling a free kick straight at the wall as Anthony Riviere won a free kick just seconds into the game.

Several corners followed for the Spitfires as they threatened to find an early goal and make use of their pressure in the opening stages.

Top goalscorer Andy Forbes, who put in a man of the match winning performance at Team Bath in the last game where he showed great versatility in doing a fine job at centre half, continued where he left off alongside Tom Jordan who together formed a form…
Post a Comment
Read more

What a difference seventy-two hours in football makes. From an extremely disappointing F A Trophy exit at the hands of Bashley, Eastleigh returned to take three points in an away fixture against a side in the top tier of the table for a second successive away fixture.

It was not as if the evening started easily for The Spitfires either. With Warren Goodhind failing a fitness test and Trevor Challis out injured, Andy Forbes was forced to take the more unfamiliar role of centre back. It came really as no surprise at the end of the match that Forbes had given a man of the match performance. Jamie Brown returned to the strike force to partner Matt Groves whilst Luke Byles returned from suspension to fill the left back role allowing Steve Clark to move forward into the midfield. 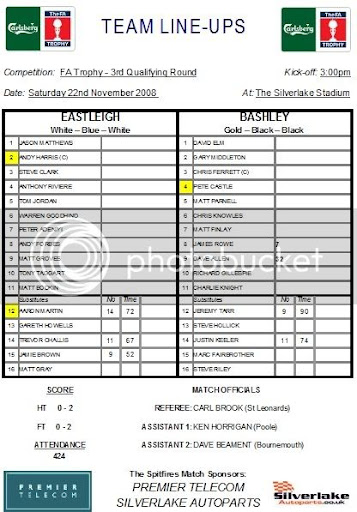 By Jamie Montigue
Eastleigh exit yet another cup competition as they fell dismally at home this afternoon to Southern Premier League side Bashley.

Falling behind after just seven minutes, Eastleigh got off to a horrid start as visiting Bashley opened the scoring in this FA Trophy cup tie.

After such a good away win in the league last weekend with a 1-4 win over Maidenhead United, surely another cup exit could not be on the cards this afternoon, could it? What a difference a week makes it football.

Bashley certainly seemed to be more determined and once they went ahead, not once did they look like giving it up, neither did Eastleigh threaten to put up a fight to get back on level terms. The visitors were here for nothing less than a win as their early intentions proved.

Throughout a dismal first half Eastleigh had just two clear-cut chances but could not make the most of either. The longer the half wore on, the more …
Post a Comment
Read more

Reserves come out on top in goal glut as run continues

This reserves game in the Suburban Premier League saw constant action in the opening twenty minutes where four goals were shared, and the game continued in this vein with the Spitfires coming out on top in a seven-goal thriller.

Eastleigh got off to a phenomenal start with a goal after just fifteen seconds. Nick Watt slipped an excellent ball into BRETT WILLIAMS who sidestepped the last defender with great skill before planting a right-footed shot into the bottom right hand corner of goal.

Two minutes later, the hosts were threatening again with a one-two between Chris Mason and Nick Watt forcing a corner on the far side, the set piece resulting i…
Post a Comment
Read more

- November 16, 2008
SUNDAY 16th OCTOBER 2008
SALISBURY CITY LADIES 2-3 EASTLEIGH LADIES
The Ladies continued to show why they are unbeaten in Hampshire Division 1 by coming back from 2-0 down at half time to beat Salisbury Ladies 3-2.

Two well-taken goals by the home team left Eastleigh deflated and flat going into half time after an exciting and action-packed first 15 minutes which saw the Spitfires challenging for every ball and taking numerous shots on goals.

After a well needed and deserved stern talking to at half time by the Spitfires Manager Ben Williams the ladies came out guns blazing and pressured every 50/50 ball and got a goal back from Amy Boucher which gave the team the boost they needed.

Eastleigh kept the home keeper busy and should have had a few more goals if not for the strong defence and keeper.

The break came again from Abby Strode-Gibbon who had another low driven shot into the bottom left which looked liked it was to be saved but the keeper fumbled and let it in....game on!

A perfect corner kick by Nick Watt saw centre back Scott Gilham charge in at the back post and head the inch-perfect delivery narrowly wide after just seven minutes.

Three minutes later Eastleigh were behind as Burnham Reserves took a 10th minute lead with a low shot past goalkeeper Jon Webb.

The Spitfires came extremely close to pulling level through Leo Simoes who reacted quickest to a loose ball in the box from an Arron Milburn free kick though his instinctive volley towards goal was met by an even better one-handed diving save from Burnham's skipper and keeper who showed tremendous reactions to keep out the close range effort.

Maidenhead United's unbeaten home record for 2008/9 had come to an end a week earlier when Chelmsford City took over top spot in the Division with a 2-0 victory at York Road. Fielding the same eleven against Eastleigh, Maidenhead suffered an even heavier defeat as The Spitfires fired three goals in an eight-minute spell at the start of the second half.

Playing in a 4-4-2 formation, Eastleigh manager Ian Baird brought back Matt Groves into the attack at the expense of Jamie Brown, whilst Andy Harris started in his normal right back position and Steve Clark wide right midfield.

The opening part of the game saw both sides exerting lots of energy but no composure or penetration from either side on an afternoon when a blustery wind was making conditions difficult. It was the first real goal attempt by either side after thirteen minutes that brought the first goal of the afternoon. Owing to …
Post a Comment
Read more

It should have come as no surprise really that James Baker signed last summer from Braintree Town, then was released three weeks ago by Eastleigh FC, though is still joint leading goalscorer for the Club so far this season, would haunt his old team mates with two goals in the first half as Eastleigh slipped to a defeat at Welling United.

In a fixture rearranged owing to no F A Cup action for the two sides, the irony is is that if Eastleigh had not lost to Burgess Hill in that competition four weeks earlier; Baker could still have been wearing Eastleigh colours. Andy Harris returned to the Eastleigh side in a midfield role following his spell on the sidelines with a suspension whilst Matt Bodkin was relegated to the substitutes bench to deny himself a start against one of his former clubs. Jamie Brown was also favoured in the attack with Matt Groves being replaced.

Notching up their third successive league win in an unbeaten run that stretches back ten games to August, Eastleigh's reserve side overcame a 2-0 half time deficit to run out 3-2 winners.

This latest fantastic result sees Paul Wiltshire and Wayne Mew's youthful side sit proudly at the top of the Suburban Premier Division.

AFC Wimbledon took a blistering lead with just four minutes on the clock. A stunning volley from the edge of the penalty area sailed past the helpless Jon Webb and into the top corner.

October Player of the Month Awards

Blue Square Announce “Player of the Month” Winners for October

“Histon’s Oyebanjo scoops October honours!”
Histon defender Lanre Oyebanjo has won the Blue Square Premier "Player of the Month" award for October. The versatile defender, signed from Brentford in the summer, has wasted no time in making an impact at The Glass World Stadium. Oyebanjo has been at the heart of a defence which went through the whole of the month without conceding a single league goal. The Stutes recorded excellent victories at home to Salisbury and league leaders Crawley, as well as a hard fought victory at Ebbsfleet in front of the TV cameras. Setanta’s Paul Parker, who won most of his England caps in Oyenbanjo’s favoured right-back position said “Lanre has lots of potential. “He’s tenacious, has plenty of energy and is not afraid to get stuck in.” Histon find themselves in the Blue Square Premier play-off positions following their superb run.

Eastleigh were swept aside by Puma Youth League Football Alliance side Swindon Town in this First Round F A Youth Cup tie. The same side had scored four goals at A FC Bournemouth three days earlier with the same scorers on the night as that day, with two apiece for Jamie Taylor and Lloyd Macklin.

It was a credited performance though for Eastleigh against a side recording their twelfth successive victory. Eastleigh showed a bit of naivety in their defending against a side that were highly dangerous with the blistering pace of Macklin, a winger who also possessed the quality of being able to cross the ball whilst on his run. In addition to this the majority of the Swindon side managed by ex-Welsh international Paul Bodin, were second year professionals whereas Eastleigh…
Post a Comment
Read more

Eastleigh picked up their first league win in four games with a deserved 2-1 victory over a Hampton & Richmond side who were unbeaten in seven league games winning five on the bounce coming into this game.

Both Andy Harris (suspended) and Trevor Challis (injured) were missing from the squad and there were places for new signing Steve Clark who joins the club from Bromley, and a first league start of the season for Andy Forbes.

On the back of a confidence boosting 6-0 win over Totton & Eling in mid-week, Eastleigh took on Alan Devonshire's in-form troops in extremely adverse weather with the bitter cold, the blustery, swirling wind and constant heavy rain.

The first of the action saw a deep, looping free kick from Tony Taggart curl into the penalty area and bounce awkwardly in front of goal where the ball popped up and narrowly over the target.