Showing posts from July, 2012
Show All

Eastleigh suffered their first defeat of pre-season at the hands of Sholing FC despite a 2-1 half-time lead.

Jai Reason continued his fine form since joining the club in the summer from Braintree, putting in an excellent first half display with an assist and a stunning goal.

In the tenth minute Reason teed up Moses Ademola whose shot from 10 yards was deflected narrowly wide for a corner.

A powerful strike from the edge of the penalty area from trialist Mark Hughes (formerly of Barnet) flew just off target soon after.

In the 14th minute, former Eastleigh reserve striker Ben Chambers played a through ball into the path of Barr…
Post a comment
Read more

Nasty Adam is back at Eastleigh

Manager Ian Baird tried to bring the 30-year-old back to the Silverlake Stadium last September, but finances were tight at the time and Everitt was out of their price range.

Everitt's last spell at the Silverlake in 2007/08 was not a great success but, according to Baird, that was chiefly because he wasn't particularly popular with his teammates.

"Some of the players I inherited at Eastleigh didn't like him because he's quite open and honest and speaks his mind," said Baird.

"But I wanted to bring him back because he brings us an ingredient we're a bit short of. We need someone who's nasty, in the right way, and vocal. "Plus he's competition for Greener who has pretty much had that position to himself. "Adam was Staines's captain last year, but he was out o…
Post a comment
Read more

An evening with Ted MacDougall 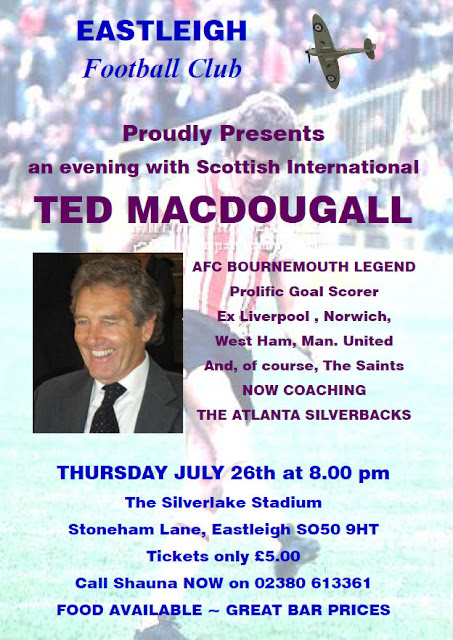 Reason to be cheerful

By Wendy Gee -
EASTLEIGH battled out their second 2-2 draw of pre-season at Blue Square Bet South rivals Sutton United on Saturday.
Having let slip a two-goal lead at Poole Town on Thursday night, Ian Baird's new-look side reversed the process at Gander Green Lane.
They trailed 2-0 to a well-taken Harry Beautyman strike and a Jamie Stuart header from a corner before pulling a freakish goal back before half-time.
Sutton keeper Kevin Scriven failed to gather a high, inswinging delivery and although Jai Reason's shot was cleared off the line, the ball ricocheted off the unsuspecting Gareth Gwillim and snuck in off the post.
Reason - a summer signing from Braintree Town - levelled things up, holding off Craig Dundas before drilling low into the corner from 25 yards.
With Tuesday's scheduled home friendly against Crewe Alexandra cancelled because of recent wet weather, Eastleigh return to actionat Southern One South & West side North Leigh on Saturday.
Post a comment
Read more

Pitch not ready yet

EASTLEIGH have had to cancel their first home pre-season friendly against Crewe Alexandra next Tuesday.
Having done major pitch improvements during the summer, they have been advised not to play on the surface too early following recent torrential downpours.
A club spokesman said: "We have invested heavily in the pitch to provide the playing surface fans, management and players alike all crave.
"Reluctantly, and under instruction, we have had no option but to call Tuesday’s game off to ensure the pitch will be durable for a busy Blue Square Bet South programme.
"We do not anticipate any issues with our next home fixture against Oxford United on Tuesday, August 7."
Crewe have replaced the fixture with a trip to Southern Premier outfit Bashley.
"It's disappointing, but it can't be helped," said Eastleigh manager Ian Baird, whose side got pre-season under way with a 2-2 draw at Southern One South & West side Poole Town last ni…
Post a comment
Read more

- July 19, 2012
The Spitfire’s first home pre-season friendly at the Silverlake, next Tuesday 24th July, against Crewe Alexandra has had to be cancelled due to the torrential weather conditions we have witnessed over recent weeks.

As some of you will be aware, this summer we have invested heavily in the pitch to provide the playing surface fans, management and players alike all crave. Reluctantly and under instruction we have had no option but to call next Tuesday’s game off to ensure the pitch will be durable for a busy Blue Square South programme.
Post a comment
Read more 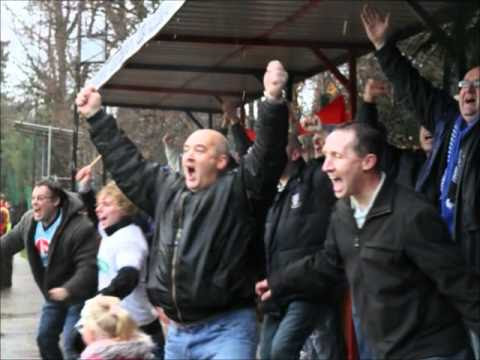 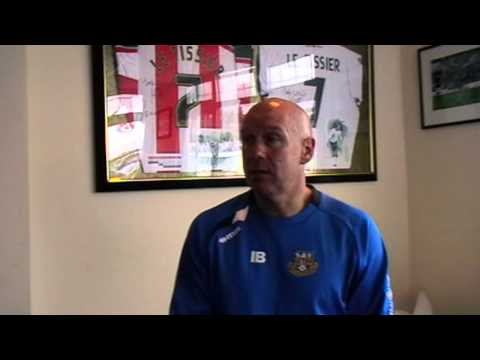 The live show will be available to listen again all week via the BBC iPlayer, plus there will be a longer version available each Sunday via free download from the 5 live website, http://www.bbc.co.uk/5live.
Hosted by Caroline Barker, the show has a long history of championing the game and will continue to look at the current issues affecting all levels of football below the Football League.

Commenting on the new addition to the 5 live schedule, deputy controller, Jonathan Wall said: "We are delighted to make this the new weekly home for non-league football fans. It shows our commitment to all levels of the game in this country. The passion and the commitment from Caroline and her network of contacts will ensure we…
Post a comment
Read more

- July 16, 2012
We would like to thank everyone that attended our family Funday on Saturday and hope you enjoyed yourselves, despite the terrible weather conditions. We were delighted to see so many people wearing the new Eastleigh kit and sales of the reduced ‘early bird' season tickets continue to fly off the shelves! With season ticket sales fast approaching 250 and only two weeks remaining, get in quick to enjoy those heavily discounted prices!

The winners of the Green King Clubhouse Raffle were:

Paul, Nick and Andy will each receive a slab of IPA or Carlsberg.

The ‘guess the number of balloons in the Bridle mini' competition was shrouded with controversy. The count was made and a winner identified but seconds before the announcement was due to be made, a clever spark opened the boot of the Mini. Much to everyone's horror another ten balloons took flight into the sky!

Moses ninth in at Eastleigh - and there's still more to come

MOSES Ademola became the ninth player to touch down in Eastleigh's summer arrivals' lounge this week.

But manager Ian Baird is still one, or possibly two, players short of his dream squad for next season.

Ideally he would like to make another midfield addition but, in order to take his signings into double figures, he needs to move one or two players on.

Midfielders Danny Smith and Chris Flood were both transfer-listed at the start of the close season but, as yet, there is no sign of either finding a new club.

"We've had some tentative enquiries for Chris and Danny from clubs in lower leagues and I've passed on their numbers to the players but, as yet, nothing has happened," said Baird.

"In my opinion we need one, or possibly two, more signings to complete the squad, but I'm aware of the financial situation and when I spoke to (club owner) Stewart Donald, he said we'd need to get one or maybe two players out."

Eastleigh Football Club is delighted to announce that Moses Ademola has agreed to join the Club on a long-term contract.


The 22-year old striker who can also play right wing completed a medical before agreeing terms at the Club's training ground this evening. The completion of the transfer is now just the subject of formal processes.

Ademola arrives from Blue Square Bet South champions Woking FC, where 21 goals in 71 league appearances made him a firm favourite with the fans, enjoying a two and a half year spell at the Kingfield Stadium.

The gifted youngster spent his formative years at Cray Wanderers in Crawley, London, eventually leaving in 2004. Having signed for Croydon Athletic, Ademola competed in Sky TV's reality show, Football Icon 2 in which young players competed for a contract at Chelsea - he finished as a losing finalist.

Scoring 19 goals for Croydon in the Isthmian League Division One he signed his first professional deal with Brentford in May 2008, for a reporte…
Post a comment
Read more

- July 09, 2012
With Eastleigh's list of summer signings fast approaching double figures, there will be a brand-new look to the side next season.
And fans will have the ideal chance to familiarise themselves with the Spitfires' new recruits next weekend when the club host their very first Family Open Day on Saturday, July 14 (10am-2pm).
Supporters can watch an open training session, involving the full first team and have unlimited access to the Silverlake Stadium.
They will also get the chance to have a photograph taken with the Hampshire FA Senior Cup, which Eastleigh won at St Mary's against AFC Totton in May.
With a large number of local businesses supporting the event, it promises to be a great day out for the whole family with stalls, live music, a bouncy castle, stilt walkers, jugglers, fire eaters, a bungee run, face painting and lots, lots more.
Eastleigh FC Juniors will be officially launched as the Blue Square Bet South club look to attract the next generation of supporters to …
Post a comment
Read more

Baird a Shaw bet for Eastleigh

By Wendy Gee -
WAYNE Shaw believes Eastleigh boss Ian Baird has "all the tools" to guide the club into the Blue Square Bet Premier.
The larger-than-life goalkeeper, who returned to the Silverlake this week after a four-year absence, knows just what it takes to break into the promotion pack after being part of the Sutton United squad that made the play-off finals last term.
With Sutton's first-choice keeper Kevin Scriven injured, Shaw, 41, rolled back the years by keeping a clean sheet in the Us' 0-0 draw at Welling United in the play-off semi-final second leg.
Unfortunately Sutton paid the price for a home defeat, losing out 2-1 on aggregate, and it was Dartford who eventually joined champions Woking in non-League's top flight next term.
Eastleigh finished down in 12th place in what turned out to be a transitional campaign. But, with new owner Stewart Donald of Bridle Insurance pumping big money into the club, the Spitfires have strengthened considerably this su…
Post a comment
Read more

- July 04, 2012
The Spitfires will begin their defence of the Hampshire FA Senior Cup with a 2nd round tie v Stockbridge or Christchurch on 9th Oct 2012.