Showing posts from March, 2007
Show All

With a disappointing performance Eastleigh slipped to a single goal defeat which at the end of the day leaves The Spitfires just four points above Hayes who still occupy the third relegation spot with fellow relegation haunted side Weston Super Mare having picked up a 5-1 victory on Saturday over Dorchester.

It was a strange Spitfires line up selected mainly as both Danny Smith and Jamie Brown were both unavailable owing to suspension. Andy Harris returned to the first team fold with Ian Oliver occupying a left side midfield position and Carl Wilson-Denis claiming his first start since the middle of January.

The game itself was never going to be classic. With so much at stake for both sides on a less than perfect surface and a swirling wind, which Eastleigh attacked with in the first half. It was a bright Eastleigh opening. Only five minutes had been played when Andy Forbes appeared to have been tripped just inside the pe…
Post a comment
Read more

It's been a hard few days for the reserve team, coming to terms with the injuries to 16 year old Grant Porter, and defender Nicky Cole. Tuesday night's trip to Harefield ended in disaster when both youngsters sustained broken legs leading to the abandonment of the game, with the scores level (1-1).

So, if there was one way to wish the pair well it was to keep the winning run going with form that has seen Ian and Wayne's side go on a run of five straight victories.

"Eastleigh's Reserve game at Harefield last night was abandoned mid-way through the second half due to two serious injuries to our players.


"In the 35th minute of the game Nick Cole broke his leg following a tackle on the halfway line and then mid-way through the second half, youth team goalkeeper Grant Porter also broke his leg after a collision with one of our defenders.


"Both lads will be operated on today and will hopefully be released from hospital at the weekend.

Our best wishes go out to both players and hope for a speedy recovery to allow them to wear the Eastleigh shirt again as soon as possible." - Wayne Mew

Best of luck to both Nick and Grant with their recovery, two very talented players with a lot of potential.
Quote from Wayne Mew's post on Eastleigh's messageboard this morning:
Post a comment
Read more

Glasspool at the double

Three wins in a week for the reserves were complete this afternoon at the expense of Walton & Hersham. It was a commanding performance for the most part in difficult windy conditions, as the side ensured not only four wins on the trot but consecutive clean sheets also.

ZACH GLASSPOOL got the ball rolling in the 21st minute when he despatched an excellent through ball by Chris Hall, with a smart finish into the bottom right hand corner giving Eastleigh the upper hand.

The talented young forward, who is currently being utilised as a left winger, had the confidence to go for goal shortly after netting the opener, from way out on the far touch l…
Post a comment
Read more

Eastleigh continued their sublime home record with a win over lowly Bedford Town, only this time they kept a clean sheet as well.

It wasn't the most exciting of games, in fact it was the opposite, but the Spitfires' did exactly the job to get the right result. Liam Green was the star of the show, not only netting the opener but having a good all-round game, along with Steve Watts who capped the evening off with a wonder free kick.

The Eagles were always going to be in for a tough game. As the bottom club in the division to come to the Silverlake Stadium, against an in-form Spitfires side that are playing some of their best football to date.

In light of the defeat away to Welling last weekend, Jason Dodd reverted to the 4-4-2 formation that did his side proud in the recent home victories over Farnborough Town and Newport County, and it paid dividends. This change brought about a shuffle to the lineup with Rob Mars…
Post a comment
Read more

Eastleigh lined up with a mixture of first team players and under 18's joining the main stays of the reserves. Captain Andy Harris, fellow midfielder Liam Green and forward Carl Wilson-Denis were the first teamers to bolster the team along with a couple of under 18 players including right back Jon Horner, and Nathan Lynch who partnered Wilson-Denis in attack.

Other youngsters stepping up to reserve team football for the night were, Ross Walliss and Tom Riddel joined by Zimbabwian trialist Patmore Sherini and Joe Prince-Wright who all started on the bench.

Eastleigh took the lead in the 12th minute when ZACH GLASSPOOL playing in an unfamiliar wide left position, met a cross on the far edg…
Post a comment
Read more

Welling United lifted themselves into the play off places with this victory over Eastleigh. The Spitfires put up a spirited performance and should really have been in the lead before they found themselves two goals behind.

Ian Oliver returned to the side at the expense of Francis Benali and Rob Marshall also earned himself a recall with Darren Wheeler dropping with Benali to the subs bench.

Eastleigh opened the better of the two sides. Steve Watts set up an early attack with Andy Forbes playing the ball off for Jamie Brown but the striker fired over the bar. A minute later, home goalkeeper Lee Turner saved a Forbes header from a Danny Smith free kick.

Welling’s first chance fell on quarter of an hour when their captain Jamie Day was left free on the edge of the box but he shot tamely at James Pullen. Eastleigh quickly broke to the opposite end forcing a corner from which Steve West saw his header cleared off the line by…
Post a comment
Read more

The last time these two sides met was back in November in the league cup, where Eastleigh cruised to a 7-1 victory. This time, it wasn't quite so emphatic and in fact they had to come from behind to steal a narrow victory.

With games coming thick and fast for the first team it has been decided that the pitch at the Silverlake Stadium needs to be protected and this will be done by the reserves playing their home games at BAT's ground in Totton.

Eastleigh had numerous chances early on with but just couldn't finish. Inside the first minute of the game Liam Winzar's free kick was met by a weak effort from Williams at the far post.

Shot out of Cup

In this Hampshire Senior Cup Quarter Final, it was the second string of Aldershot Town who edged past a much change Eastleigh side, who have already played twice this week with a further game this Saturday, by a solitary goal in the 56th minute.

On the bright side, it is one less game to fit into an already congested schedule. However, Eastleigh having comprehensively beaten Farnborough Town in the league a short while ago, the side who now face Aldershot in the semi final, there was a good chance of winning the competition.

That said the first half was very uninspiring with neither side finding a clear-cut chance and both keepers have relatively little to do.

After a fairly good opening from Eastleigh, Liam George looking the brightest player having a couple of half chances, it was Aldershot who made the first real threatening attack. The pace of Kirk Hudson down the right hand side saw him past Ian …
Post a comment
Read more

So far so good, as Eastleigh pressed on with their busy schedule with a second comprehensive win in as many days. Yet another classy performance from the Spitfires saw them come out firing on all cylinders finding themselves two goals to the good in the blink of an eye, and just like they did in the Farnborough match at the weekend, they comfortably saw the game out.

The only change from the winning side, saw Liam Green replace the injured David Hughes in the centre of midfield.

Newport were panicking from the start with the excellent Steve Watts and Jamie Brown letting their presence be felt up the front, giving their opponents no time on the ball. The constant chasing down and pressure from the two Eastleigh forwards almost led to catastrophe in the third minute for Newport, as Stewart Edwards played across his own goal with his keeper missing the ball before it was eventually hacked away.

At the start of Eastleigh's busiest week of the season with four games in eight days, the Spitfires got off to a perfect start. It was like they had never been away, their last home game seeming an age away, with a resounding 3-1 victory that sees the side shoot up and out of the relegation zone into 17th place with games on their side. A crucial win for Jason Dodd and his Spitfires.

Eastleigh were the quickest out of the blocks looking lively and hungry for victory. Steve Watts’ looping header the first attempt on goal in the 9th minute, this coming from a great right wing delivery by Tarkan Mustafa. The save in the end was comfortable from Kevin Scriven but the attack showed good promise and intent from the home side.

The game was barely thirteen minutes old when Eastleigh stormed into the lead through KARIM EL-SALAHI. Danny Smith, the captain, had a free kick palmed to the back post by Scriven, who could no…
Post a comment
Read more

Eastleigh returned from top of the table Histon with nothing to show for their endeavours on a particularly heavy surface. For Histon this recorded their fourth single goal victory in five games whilst for Eastleigh this was their seventh 0-1 reverse in the Nationwide South this season.

Jason Dodd gave a start to Liam Green for the first time in a league fixture since he took the managers role at the start of December. Green gave a solid performance that saw him denied a goal by an earlier infringement.

Histon opened the brighter. On four minutes a flowing move on the difficult surface involving Neil Kennedy, Jamie Barker and Nathaniel Knight-Percival ended with a shot from Barker being saved by James Pullen. A minute later Neil Kennedy got under a cross from Knight-Percival and his header went wide of the target. 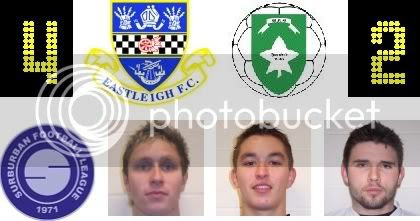 The visitors could so easily have taken the lead within the first minute of the game, as Jaydon Gibbs threaded a ball through to Jack Gallafant. The Whyteleafe striker got the better of Rob Marshall but hit a miserable attempt at goal with just the keeper to beat.

Eastleigh fell behind on 16 minutes to a splendid strike from Jerome Elroy (pictured below). As the throw came in quickly, the Spitfires were caught napping and were made to punish by the sweetly struck volley that went in off the upright. …
Post a comment
Read more

- March 03, 2007
Martin Thomas has ensured Eastleigh's growing friendship with neighbours Winchester City continues as he last night signed for City on a dual contract. This will see the Spitfires retain his registration whilst allowing the combative midfielder to play for Winchester in the Southern League.
Post a comment
Read more
More posts