Showing posts from February, 2009
Show All

Eastleigh ended the afternoon in third place in the Blue Square South, thanks in the main to play-off seeking rivals Chelmsford City suffering a 2-1 defeat away to Bishops Stortford, whilst at the Silverlake Stadium the Spitfires were held to a goalless draw with Maidenhead United.

Tony Taggart sustained a hamstring injury in the midweek win over Newport County and is expected to be out for around two weeks. This forced manager Ian Baird into making one change to the starting line up as Warren Goodhind was drafted into the defence at right back, allowing Steve Clark to operate in the midfield to fill the void left by Taggart.


In the opening stages either side had good opportunities within a matter of minutes of each other. Anthony Riviere was particularly lively from the start as he won an early corner kick and then forced a save out of Shane Gore on two minutes. Finding himself free in…
Post a Comment
Read more

Eastleigh completed their second double of the season when they won 1-0 at Newport. They announced an unchanged line up from Saturday's game with Bishops Stortford, which meant that new signing Bertie Brayley who was returning to the club after a short spell in 2006 was on the substitutes bench.

Early on, Tony Taggart had a shot saved and Newport's Kris Leek also shot just wide. For Eastleigh Jamie Brown and Brett Williams came close with headers following crosses by Peter Adeniyi and Anthony Riviere respectively, however after a bright start from the Spitfires, at the other end Newport who included former Eastleigh defender Ashley Vickers, and familiar names to Salisbury followers in Wayne Turk and Aaron Cook, came close twice with Cochlin having one shot saved one-handed by Matthews, and another of his efforts hitting the bar.

Back in the Cup, Bertie Brayley returns and Carew's loan stay is extended

Ian Baird is "pleased" that Eastleigh have been given a second chance of glory in the Hampshire FA Senior Cup.

The Spitfires' interest in the competition looked to be over when they lost their quarter-final 2-1 at Andover on February 12, writes Wendy Gee.

But it emerged that Andover had unwittingly fielded an ineligible player - midfielder James Roden having already appeared in the competition for Winchester City against Bashley.

The Spitfires were willing to play the tie again but, following yesterday's Hampshire FA hearing, the Lions were thrown out of the cup and Eastleigh reinstated.

It means Baird's promotion chasers, currently fourth in the Blue Square South, are now favourites to make the St. Mary's final on April 30.

They are joined in the last four by Sydenhams Wessex League duo VT FC and Brockenhurst - plus Fleet Town, who defeated Bashley 2-1 after extra time last night.

- February 22, 2009
Eastleigh Ladies’ campaign for the Hampshire Division 1 title continued to be back on track with a 4-1 win over Farnham Ladies. A fixture that had already been postponed twice, saw the Spitfires take another step towards the top of the leader board.

Goals from Amy Boucher, two from Night Akhonya and a cracking left-footer from Tash Gwyther saw all three points in the bag.

Next week is a 6-pointer against title rivals Pompey Uni.

Please come and support the team in a game which could make or break the title chase!
Post a Comment
Read more

In search of their fifth consecutive league win, Eastleigh were without one of the goalscorers from their 2-1 win over Fisher Athletic on Wednesday night. Jonny Dixon whose loan from Brighton has been renewed, netted the opener inside ten minutes but later sustained an injury as the Spitfires did a professional job ignoring the 'side story' and media interest with regard to Donna Powell taking charge for the night.

Dixon's absence was filled by manager Ian Baird handing striker BRETT WILLIAMS his first league start for the club in this afternoon's encounter with Bishops Stortford.

The youngster could not have wished for a better way to celebrate the occasion as he fired the Spitfires into a 6th minute lead to make an immediate impact. Jamie Brown headed on a clipped ball forward for his strike partner, who had got into an excellent position to create the opportunity and…
Post a Comment
Read more

The press and media coverage surrounding Fisher Athletic and the manageress for the day Donna Powell, saw a testing evening for Eastleigh Football Club to ensure they remained focused on their objectives of the Wednesday trip to Fisher and gain three points to keep their hope of a play off place firmly in their sights.

Whatever was happening off the park, Eastleigh had to face a side that made five changes from their previous fixture and also on a run of eleven consecutive defeats in the Blue Square South. What the home side did offer was a strong team performance with a couple of really pacy strikers/wingers amongst their side. For Eastleigh Warren Goodhind was ruled unfit and Steve Clark took over the role of right back, with that exception it was the side that had beaten Chelmsford City ten days earlier. 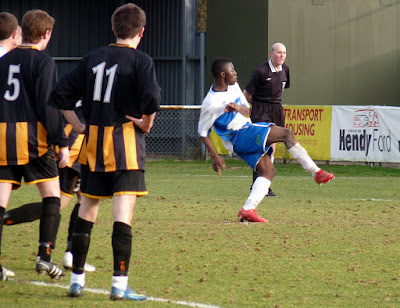 Eastleigh Reserves put in a top rate performance against Three Bridges in front of first team manager Ian Baird, who was in attendance due to his side not having a game this weekend.

The hosts took control of the game throughout and always looked comfortable. In the opening stages right winger Youssuf Bamba posed the most threat to the visitors with positive running and the end product to match.

Striker Chris Flood was the greatful recipient of an early delivery into the box by Bamba and came close to breaking the deadlock inside the opening ten minutes.

The matchday programme had reminded Eastleigh that on five previous cup encounters between the two sides, Andover had won all of them. It was unfortunate then for Eastleigh that their interest in this season's Hampshire Senior Cup came to an abrupt end at the Quarter Final stage thus making that statistic now six cup games. Having already lost to lower league opposition in the FA Cup and FA Trophy to Burgess Hill and Bashley; manager Ian Baird reminded his side before the game that they must be in the right frame of mind.

Though not their strongest line up Eastleigh by far had the better of the play though the home side created some clear-cut chances. Andover themselves were not what they considered to be at full strength with both Ben Buckland and Nick Eastham already cup tied and Rory Williams suspended. Eastleigh themselves had Brett Williams cup tied whilst both Andy Harris and Andy Forbes ar…
Post a Comment
Read more

EASTLEIGH have confirmed that 19-year old centre-back Aaron Martin has signed a contract for the Blue Square South promotion hopefuls.

The former England Schools' defender, outstanding during Eastleigh's three-match winning streak against Bath City, Dorchester and Chelmsford (where he scored twice during that period and helped the team keep two clean sheets), has committed his future to the Silverlake Stadium club until the end of next season.

Baird hasn't given up hope on Dixon 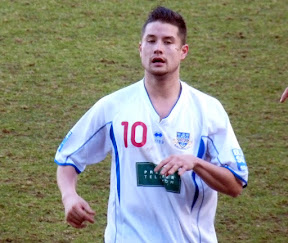 Although Saturday marked the end of striker Jonny Dixon's one month loan from Brighton & Hove Albion, Eastleigh boss Ian Baird has not given up all hope of getting him back – despite indications to the contrary last week.

“I've made enquiries for other strikers, but they're way too much money for us. I'm going back to speak to Mickey Adams to see if we can sort something out,” he said.

“Either I keep Jonny Dixon or I try and get a striker in who's played for me before or one that we know very well. It's imperative we get the right person.”
Post a Comment
Read more

January Manager of the Month Awards

Blue Square Announce “Manager of the Month” Awards for January

“Westley Takes New Year Honours At Resurgent Boro”
Stevenage Borough manager Graham Westley has won the Blue Square Premier "Manager of the Month" award for January. Westley’s side started the year with a draw at Rushden & Diamonds but then went on to win four successive league games. The pre-season title favourites moved into the top five for the first time this season but Westley has been quick to dismiss the clubs usual summer tag. “We operate with a medium sized budget in terms of the division, so it did surprise me to see us as favourites in August” the Borough boss said. As the side tried to gel together in the opening weeks of the season Stevenage struggled at the wrong end of the table. Now they look to have a settled squad with Steve Morison and Mitchell Cole in particularly good form in attack. Westley’s side also progressed through two rounds of the FA Trophy during the month, the highlight of which …
Post a Comment
Read more

January Player of the Month Awards

Blue Square Announce “Player of the Month” Awards for January

“Garner Plays His Part In Stags Turnaround”
Mansfield Town defender Scott Garner has won the Blue Square Premier "Player of the Month" award for January. Garner came into The Stags team for the 1-0 home win over Crawley Town and has not looked back since with solid displays in central defence. The 19-year-old had impressed new Mansfield boss David Holdsworth during a spell at his former club Ilkeston Town. Garner has contributed to Holdsworth’s fantastic start at Field Mill, in a defence that only conceded one goal during the month. That came in the away match at Eastbourne Borough where Garner rose to score the vital winning goal in the second-half.

In the Blue Square South the award goes to goalkeeper Matt Lovett of Hampton & Richmond Borough. Lovett was beaten only once in 450 minutes of league action during the month as The Beavers closed the gap on Chelmsford and AFC Wimbledon at the top of the table.

Eastleigh today secured a tremendous result over promotion hopefuls Chelmsford City. A third consecutive victory for the Spitfires sees Ian Baird's side up to third in the Blue Square South and has narrowed the gap to keep the pressure on both Chelmsford and league leaders AFC Wimbledon in a fine team performance. What impact will winning this six-pointer have on the outcome of the title race remains to be seen, but one thing is for sure is that Eastleigh can be very proud of achieving a result as important as this and the manner in which they went out about it.

It was a miracle in itself that the game went ahead and tribute has to be paid to those club officials and fans who gave up their time this morning to fork the pitch. This effort gave the game every chance of being played despite the recent snow which forced Tuesday's nights home game with St. Albans to be postponed once again…
Post a Comment
Read more

On a day that would of made a snowman shiver, Eastleigh Ladies took control and had numerous shots on goal including hitting the woodwork a few times within the first 20 minutes.

Though once the home team picked up momentum, the Spitfires struggled to keep the attack up, battling against the strong winds.

Basingstoke scored just before half time with a well-worked goal that caught Eastleigh on the back foot.

Eastleigh tried to take advantage of the wind in the second half and continued to play the ball down the flanks to our speedy wingers. The Spitfires' strikers made some great runs and Basingstoke didn't know what hit them with Night Akhonya running rings around their defence. Though they played the offside trap well, Night managed to get on the score sheet and equalised for the Spitfires to much joy of the rest of the team and faithful supporters!