Showing posts from April, 2009
Show All


With effect from May 1st, Paul Murray will reassume the role of Chairman at Eastleigh Football Club.

Paul stood down from this position in August, so that he could concentrate on his main business interests during the more demanding economic conditions that currently exist. Paul comments; "Now that we have taken the necessary adjustments to our business operations, I am more comfortable with the commercial environment within which we now have to work. I am therefore more than happy to return as Chairman of the Club, a role that I enjoy and one which enables me to contribute to the ongoing success of the football club."

The outgoing Chairman, Chris Evans, has now based himself abroad, and has therefore found it difficult to be as involved as he would have liked. He continues to be a Director of the Club and will continue to help with the strategic development of Eastleigh Football Club.
Post a Comment
Read more

TUESDAY 28th APRIL 2009
Blue Square South - Play off Semi-Final Leg 1
Report by Ray Murphy
The two league games that these two clubs had contested this season produced a solitary goal and that scored by Eastleigh came with almost the last kick of the game. Few therefore who visited the west London home of Hayes & Yeading United for this Blue Square South semi Final First Leg play off would have expected the scoring spree to be presented on the evening nor the value of the Eastleigh victory against a host side that had completed their last fifteen Blue Square South fixtures without a defeat.

The Spitfires welcomed back first choice goalkeeper Jason Matthews and midfielder Anthony Riviere into their side that also contained the returning Warren Goodhind and Jamie Brown restored to a striking role. An exhilarating opening by Eastleigh saw them take a four-goal lead as well as miss a penalty and see their opponents lose their leading goalscorer to a …
Post a Comment
Read more 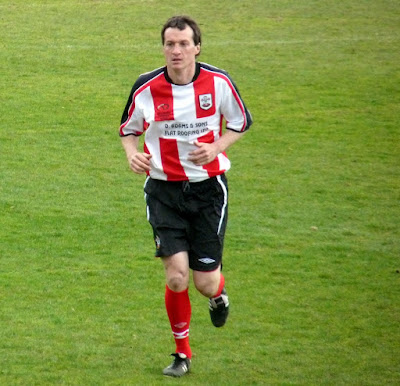 By Jamie Montigue
Southampton and Eastleigh legend David Hughes had a day to remember as in excess of 1,800 turned out to support his thoroughly deserved testimonial game held at the Silverlake Stadium.

Stars past and present turned out for the 36-year-old midfielder with an ex-Saints XI taking on an ex-Eastleigh side. Comedian Mike Osman provided entertainment throughout the afternoon with witty commentary and banter during the game.

FA Cup winning manager Lawrie McMenemy kicked the game off with fans favourite goalscorer James Beattie (now of Stoke), but the striker could not play any further part due to an injury. The starting line up for the Saints was as follows:

Neil Moss in goal, a back four of Paul Telfer and Francis Benali as the full backs and deadly defensive duo re-united in the centre as Claus Lundekvam and Michael Svensson lined up alongside each other at the heart of defence. In the middle were Jo Tessem, David Howells, Matt Oakley who recently won promotion to the Champion…
Post a Comment
Read more


Eastleigh finished their final league game of the season ahead of the playoffs with an away draw at Hampshire rivals Havant & Waterlooville.

Ian Baird was dealt with the double injury blow this week of both his goalkeepers Jason Matthews and Gareth Howells picking up injuries. As a result, the Conference gave the Spitfires the go ahead to make an emergency loan signing which paved the way for Braintree’s Nicky Morgan to make his Eastleigh debut this afternoon.

The only other changes to the starting eleven from the 1-0 win over Worcester last time out saw Steve Clark come into the side at right back in place of Warren Goodhind whilst Jamie Brown was back in action at the expense of Anthony Riviere, who was rested.

Morgan drafted in to deal with goalkeeping crisis

With both of Eastleigh's senior goalkeepers out injured; Jason Matthews suffering from a groin problem and Gareth Howells a leg injury, the Spitfires have been given permission by the Football Conference to make an emergency loan signing.

This evening an announcement on the Eastleigh messageboard confirmed the reported story in today's Daily Echo that Braintree Town's Nicky Morgan has been drafted in on loan to cover for tomorrow's showdown with rivals Havant & Waterlooville and for the playoffs if necessary should Matthews not return to fitness in time for Tuesday's Semi-Final away leg.
Post a Comment
Read more

Poate signs on for next season

- April 23, 2009
Eastleigh have captured a new signing ahead of next season, perhaps in light of Luke Byles imminent departure after the playoffs. Managing Director Dave Malone confirmed the transfer:
"We are delighted to confirm that tonight we have completed the signing of Brett Poate.

"Brett, aged 25, was previously with Havant & Waterlooville and was prior to that at Southampton.

"Of course Brett will not be available to play for us this season, but we look forward to seeing him in an Eastleigh shirt as soon as pre-season comes around!

Born 1983 Brett joined the Hawks on loan in August 2002 from Southampton FC’s Youth Academy, where he was a third year student. Having played against the Hawks earlier the same month in a pre-season friendly, he impressed enough to be drafted in at the start of the 2002/03 season to cover for injured players.

Saints released Brett at the end of that season, and he returned to the Hawks after …
Post a Comment
Read more

Anthony Riviere made an extremely welcome return to action for the first time since the end of February following a troublesome groin injury. Brett Williams was preferred to Matt Groves up front, whilst Tony Taggart came back into the starting line up at the expense of Steve Clark following the Bank Holiday Monday defeat to already relegated Bognor Regis. Gavin Heeroo was suspended for today’s game, whilst Jamie Brown was held back once more to ensure the target man didn’t pick up another booking which would have stopped him from playing in the playoffs.

The visitors started the brighter of the two sides pushing forward early on and getting the ball to the skilful Marco Adaggio at every opportunity. Towering left-back Kevin Spencer wa…
Post a Comment
Read more

Winning run comes to an end at relegated Bognor

Eastleigh visited the already relegated Bognor Regis Town for this Bank Holiday Monday Blue Square South fixture and manager Ian Baird made two changes to the side that had beaten Bromley by a single goal three days earlier. Jamie Brown was rested from the squad all together whilst Warren Goodhind returned from injury with Tony Taggart taking a place on the bench. Steve Clark moved forward to a midfield role whilst Matt Groves was given the role of leading the front line. Bognor Regis included ex-Eastleigh players Nathan Lynch, Jack Smith and Danny Smith.

The first half was very disappointing. Bognor winger Louie Castles caused Eastleigh concern on the right flank whilst diminutive striker Jahson Downes often popped up in good positions in and around the area. The first strike on goal did not arrive until the eighteenth minute then it was a long range Danny Smith free kick that was saved by Jason M…
Post a Comment
Read more


Having already secured a playoff place in what has proved to be Eastleigh’s best season at this level of football, Ian Baird’s side still have all to play for to keep the pressure on both Hampton & Richmond and AFC Wimbledon at the head of the Blue Square South.

On this Bank Holiday Good Friday, Eastleigh welcomed the visit of Bromley and looked to avenge their early season 5-1 defeat at the hands of the Lilywhites.

Naming an unchanged starting eleven from last weekend’s fantastic 4-3 win at Bishops Stortford, the Spitfires first at Woodside Park, the Spitfires came into this fixture on the back of five successive league wins and looked to extend that run to six.

For the hosts it was extremely pleasing to see box-to-box midfielder Anthony Riviere back in the squad after a troublesome groin injury that has kept the fans favourite out of action for over a month. Even though he was an unused substitute…
Post a Comment
Read more

In seven previous matches between these two sides Eastleigh had never recorded a victory, in fact the last five matches have all ended in draws. On Saturday, for those following Eastleigh it might have seemed that they had won this game twice. Seemingly cruising into an unassailable three goal lead, The Spitfires found themselves pegged back to 3-2, before netting a fourth goal, though Stortford kept battling to score their third in the final minute.

Warren Goodhind failed a late fitness test so manager Ian Baird brought in Steve Clark at right back to cover, that being the only change from the three goal midweek win over St Albans City. It all started well with Eastleigh going ahead on six minutes. Ashley Carew’s delightfully threaded through ball was collected by Jonny Dixon in behind the Stortford defence who drove a low shot beyond the left hand of Stortford goalkeeper Nicky Eyre for his third …
Post a Comment
Read more
More posts