Anthony Riviere made an extremely welcome return to action for the first time since the end of February following a troublesome groin injury. Brett Williams was preferred to Matt Groves up front, whilst Tony Taggart came back into the starting line up at the expense of Steve Clark following the Bank Holiday Monday defeat to already relegated Bognor Regis. Gavin Heeroo was suspended for today’s game, whilst Jamie Brown was held back once more to ensure the target man didn’t pick up another booking which would have stopped him from playing in the playoffs.

The visitors started the brighter of the two sides pushing forward early on and getting the ball to the skilful Marco Adaggio at every opportunity. Towering left-back Kevin Spencer was also posing one or two problems with his Rory Delap like throw ins that were launched into the Eastleigh penalty area time after time in the opening ten minutes.

Ashley Carew’s second minute cross had just too much on it as he swung the ball in from the right wing, whilst a Spencer throw for City saw Bampton slice a shot harmlessly over the cross bar soon after.

Adaggio combined with Matt Dinsmore in the seventh minute to set the winger free to the left of goal only to be denied by Eastleigh stopper Jason Matthews who was out well to save.

Better play from the Spitfires saw a good spell of football as the hosts began to use the width and get the ball down to pass neatly as the hosts went on to break the deadlock.

Midfielder Peter Adeniyi sprayed the ball out wide to Carew on the counter attack though his cross was collected by Daniel McDonnell ahead of Jonny Dixon. Taggart then had an in-swinging corner punched away by the visiting keeper as Eastleigh continued to press. 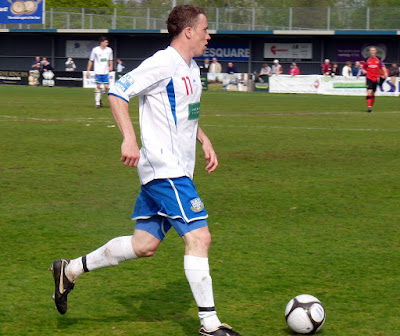 With thirteen minutes played, a Luke Byles throw from the left was flicked on by the skipper Tom Jordan into the path of Adeniyi who had made room for the shot from 8 yards out. Peter fired towards goal with his weaker left foot and wasn’t all that far from finding the net.

Eastleigh came even close a minute later when Aaron Martin got up well to nod a downward header from a Carew corner towards goal that had to be hooked away by the well-placed Craig Wilding who made a crucial goal line clearance to avert the danger and save a goal.

Making the pressure and possession count, Eastleigh found a way through in the 18th minute through an elegant move. Taggart’s left foot cross from the right wing was flicked on perfectly by Brett Williams to the back post where ASHLEY CAREW stole in to tap home from close range. 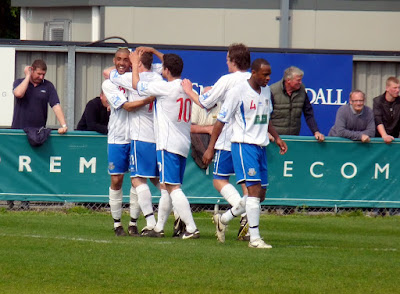 Rob Davies hit a 30-yard free kick straight at Matthews in the 29th minute, before Adeniyi worked his magic with the ball at his feet easing past two defenders at the other end of the pitch as if they weren’t even there. The former Bromley player’s shot with the outside of his boot had to be blocked and booted clear to safety.

Taggart had a good opportunity to double Eastleigh’s advantage when a Carew free kick from deep dropped to the unmarked winger on the far side of the Worcester penalty area. Leaning back slightly however, the Spitfires top goal scorer couldn’t keep his shot down and scooped his half volley high over the bar.

Ten minutes before the break Oliver Barnes curled a free kick over the Eastleigh wall and away to Matthews left with an effort that was heading for the top corner. Eastleigh’s number one was more than equal to the fine attempt as he shuffled across goal to not only get there and keep it out but also displaying his fine goalkeeping skills by catching the ball and keeping it safe in his possession.

The next action saw Riviere played into the penalty area as Taggart slipped a splendid through ball behind the Worcester back line to create a chance for the box-to-box midfielder. Coming to Worcester’s rescue, certainly not for the first time it has to be said, McDonnell came off his line to sweep up and block Riviere’s goal-bound attempt.

Continuing to press long into the half with their one goal advantage, Eastleigh threatened again in the 39th minute. A teasing cross from Byles beat all of the City defenders and dropped dangerously at the feet of Taggart who dragged a shot from 20 yards across goal and comfortably wide.

Adaggio failed to trouble Matthews with a powerless header four minutes before the break and soon after the diminutive yet tricky striker weaved his way into the Eastleigh penalty area to the left of goal but as he approached and looked set to pull the trigger in came an outstanding sliding challenge from young Aaron Martin who just continues to go from strength to strength.

On the stroke of half time Williams was denied by McDonnell who again came out quickly to block and save his side from going in at the break further behind.

A minute after the restart the 648 in attendance so nearly witnessed a beautiful strike from Jonny Dixon picking out the top corner with a super strike from 30 yards that curled just the wrong side of the post at the last second.

Still inside the opening minutes of the second half Tony Taggart caught the ball full on the volley with a stunning effort oozing power. McDonnell continued to impress as the keeper held the ball to make a difficult save look relatively easy.

Ian Baird certainly had Eastleigh in the right frame of mind for the second half as they approached the remainder of the game seemingly hungry for goals. Evidence of this was there for all to see after excellent approach play and intricate one touch football led to a big chance to enhance their lead as Riviere played a killer ball into Williams. The youngster had the ball in an excellent position in front of goal and should have done better to round off the move, instead lifting his shot off target and wayward from 10 yards out.

Williams used his pace to get on the end of a through ball down the right flank in the 54th minute and open up another opportunity for himself. This time Brett went to dink the ball over the keeper who was having none of it and again kept his side in with a chance at 1-0 standing to tall to deny the 21-year-old.

Two minutes shy of the hour, a cross from the right by the left-peg of Taggart saw Williams leap well at the far post as he headed behind.

Taggart then came close by beating his man and drilling the ball through the legs of two players towards the bottom right hand corner of goal. You probably had already guessed it, McDonnell was there to make the save and keep out the powerfully driven shot at full stretch.

The Spitfires showed no let up in their constant force in front of goal creating endless chances and looking dangerous but the all too familiar recurring theme throughout the game was the only thing to have kept them back and keep the score down to just one goal.

This rung true once more when Taggart played the ball into Riviere inside the 6-yard box and the former Fisher Athletic midfielder watched as his first shot was kept out by the keeper, only to get up and pounce on the rebound and fire wide of the mark – credit to McDonnell who had narrowed the angle and given Riviere little to aim at.

Worcester did provide Eastleigh with a little scare or a wake up call to show that there were in fact two teams in this game after all when Matt Dinsmore (looking suspiciously offside) in the 66th minute latched on to a long ball over the top and with the flag staying down, Jason Matthews was there at the edge of his box to deflect the shot away from danger.

On 74 minutes Eastleigh had their greatest chance yet to make it 2-0. Tom Jordan showed the qualities of a winger when he crossed from the right to find Williams who with the goal gaping and at his mercy opted to attack the high ball with his foot instead of his head resulting in the ball flying over the bar when it was easier to score.

Trevor Challis replaced Riviere for Eastleigh’s first substitution of the game late on and soon after Jonny Dixon in his last game for the club at the Silverlake Stadium (due to his loan from Brighton running out ahead of the playoffs) made way for Matt Groves with 83 minutes on the clock.

There was still time for one last Spitfires push to make it two when excellent feet from Adeniyi saw the big man elegantly step over the ball before slipping the ball to his left to find Taggart in space. For one last time in the game Daniel McDonnell thwarted the hosts with a brave save at the feet of Taggart, but this time the ball bounced back up conveniently for Adeniyi who nodded narrowly over the cross bar.

A 1-0 score line doesn’t quite tell the whole story of Eastleigh’s superior quality and dominance on the day and quite frankly flattered Worcester, however it was a positive attacking display and the perfect way to respond after the Bognor defeat as Matthews and his defence kept another clean sheet and send Baird’s side into the Havant & Waterlooville showdown next week on the back of a solid win.