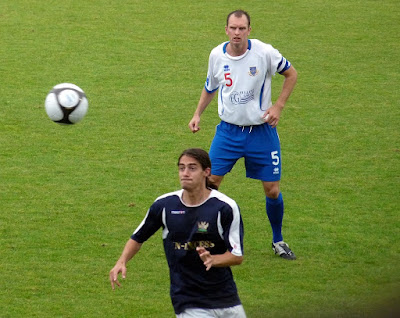 With less than a week until the new league season kicks off, local rivals Eastleigh and Salisbury City played out this pre-season friendly in miserable conditions this August afternoon at the Silverlake Stadium.

The game as a contest was very evenly matched but the Spitfires had the better of the first half opportunities against their Blue Square Premier opponents.

Tony Taggart scored the only goal of the game with a 35th minute glancing header across the goalkeeper and into the far corner following a pinpoint cross from Shaun McAuley.

After a tight opening to the second half, Salisbury stepped their game up a gear in search of an equaliser but were thwarted on several occasions as Tom Jordan, Aaron Martin and co stood up to the challenge well when the visitors exerted late pressure.

The Eastleigh defence stood solid, firm and well-disciplined to hold on to a morale boosting clean sheet and fully deserved their win heading into the Blue Square South showdown at home to Braintree Town in seven days time.

The first chance of the game came with ten minutes played as Jason Matthews’ long drop kick up the field was met by an excellent header from Andy Forbes. Danny Smith surged forward from midfield and latched on to the through ball, which fell perfectly for the shot, though the midfielder will have been disappointed not to have hit the target.

Nine minutes later, Matt Tubbs evaded the sliding challenge of Aaron Martin on the near touchline before advancing towards the penalty area. The ball was half cleared by the Eastleigh defence but only as far as Ryan O’Hara who forced a decent save out of the Spitfires’ goalkeeper.

Just short of half an hour played, Brett Williams nodded the ball back into the path of Tony Taggart who sliced a volley wide of goal, meanwhile at the opposite end a deep cross from the right saw Jason Matthews punch the ball away from danger as namesake Robbie Matthews closed in on connecting with the cross.

Tubbs then spotted an opening with Jason Matthews a good ten yards off his line as the Salisbury forward hit a speculative effort from a 35-yard free kick. Matthews read the situation well however and back-pedalled in good time, watching the ball safely into his gloves.

With what proved to be the decisive goal of the game, Eastleigh took the lead. The movement and build up play that led to the goal was perfect as Eastleigh cut through the City defence and applied the finishing touch. It took a telling delivery from the right in the form of Shaun McAuley’s fine cross to pick out TONY TAGGART who stole in at the far post unmarked to guide his header across the keeper and into the far corner.

Six minutes before the break, Jason Matthews found himself out of his 18-yard box and struggling to get back with the ball at the feet of an opponent. Managing to block and keep out the first attempt, Jason looked in trouble when Robbie Matthews had a glorious opportunity to beat the keeper. In the end, it was not even close as the ball was skied high and wide letting Eastleigh off the hook.

Salisbury went on the attack again with Tubbs slipping an excellent pass into O’Hara who found himself one-on-one with the keeper but was denied by Matthews who had got down extremely well to make the save low to his left.

The last of the first half action saw a looping Trevor Challis cross nodded down by Forbes and met by Danny Smith (who was full of running and energy all afternoon), on the volley that had to be kept out by James Bittner to prevent the hosts from doubling their lead at the half way stage. 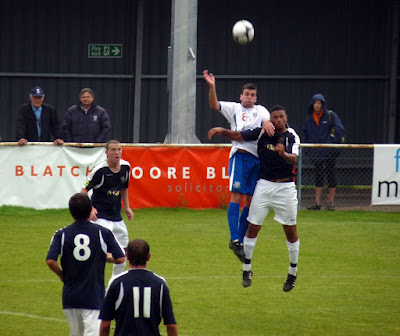 At the beginning of the second half Peter Adeniyi replaced Brett Williams.

Two minutes in, a dangerous low cross from the goalscorer Taggart, was cut out well by Sean Clohessy ahead of both Forbes and McAuley who were waiting in anticipation in the centre to turn the ball home. From the resulting corner, Brett Poate’s teasing in-swinging delivery was dealt with by the save handling of Bittner.

Matthews had a comfortable save to make soon after from O’Hara’s close range header before the visitors forced a number of corner kicks in quick succession.

Dan Webb came the closest Salisbury had come to finding the back of the net with 52 minutes played, when Eastleigh allowed the tall centre half a free header at goal from a set piece, with just the width of the post preventing an equalising goal.

Throughout the afternoon the Eastleigh defence had dealt with the physical presence and threat of Robbie Matthews, who had scored two hat tricks against League One opposition in recent friendlies including Saints, and as the game went on it looked increasingly likely that the Eastleigh back line were to continue to keep him quiet. Tubbs’ low cross in the 56th minute in search of the towering centre forward, was kept out by the fine defending of Steve Clark and Tom Jordan who combined to thwart their opponent and deny a simple tap in.

O’Hara had a shot tipped over the bar four minutes short of the hour as Salisbury continued to take the game to Eastleigh but to no avail.

Eastleigh made a couple of changes with Ian Oliver and Warren Goodhind taking to the field in place of Trevor Challis and Steve Clark. A little later Michael Green and young reserves striker Breon Graham were also introduced to the action with Taggart and Forbes making way.

In the 65th minute, Eastleigh were back to their best with Danny Smith putting Poate clean through on goal with a sublime through ball however the ex-Hawk tried to chip the ball over the keeper from 8 yards instead of going for power. The move was very pleasing and began with a powerful run out of defence by Goodhind.

Eastleigh found themselves hanging on a little as the game wore on, but weathered the storm fantastically. Despite Salisbury throwing the ball forward into attack at every opportunity, the Spitfires dealt with everything admirably and with confidence.

Robbie Matthews sent a header over the top before City came close twice from a corner kick in a matter of minutes.

Aaron Martin was in the right place at the right time to clear the ball off the line with his keeper beaten, before a misplaced back pass from Ian Oliver allowed Tubbs in on goal only for Jason Matthews to make a vital fingertip save to turn the ball away for a corner when it looked to be heading for the back of the net.

City substitute Chris Flood showed plenty of promise and pace when he came on, with one particular run through the middle of the park catching the eye.

Forbes and McAuley linked up towards the end of the game but the former Hampton & Richmond winger, having done the hard work in taking the ball past Jamie Turley, couldn’t keep his shot down.

Eastleigh will certainly be pleased with the run out and the result and will look to take the positives into next week’s big kick off when the 2009/10 league campaign begins. 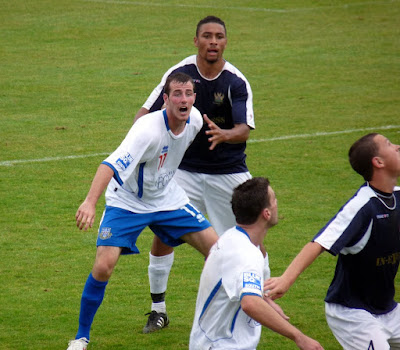