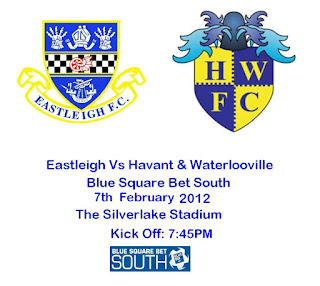 Ian Baird’s Spitfires will be looking to earn the bragging rights tonight as they play fierce Hampshire rivals Havant & Waterlooville in the Blue Square Bet South at The Silverlake Stadium.

Eastleigh are in winning form coming into this game after a 4-0 victory at home to Sutton United stretching their unbeaten home run in the league to nine games last Saturday.
Like every single team in the Blue Square Bet South, the game against Salisbury City four days ago got called off due to a frozen pitch.

While Eastleigh were cruising to a 4-0 win against Paul Doswell's Sutton last Tuesday, Havant were battling for a share of the points at home to 20th place Hampton and Richmond Borough. Having been behind twice the Hawks fought back to claim one point for their ninth draw of the season; making them the second club in the league with the most draws behind Dover Athletic.

Dave Tarpey put the visitors in front after just two minutes into the game and left The Hawks shocked with a superb curled shot past goalkeeper Lyall Beasley.

The Hawks replied just over 30 minutes later, Scott Jones flicked the ball over Dean Inman which found Steven Ramsey and the midfielder made no mistake with a fine strike on goal giving goalkeeper Craig Ross no chance.

Against the run of play, Toby Alibi was found unmarked at the back post from a searching corner and the striker put the visitors in front again with the simplest of headers just after 70 minutes of play.

The Hawks' first goal scorer Steven Ramsey turned creator when he crossed for former Spitfire Chris Holland who powerfully equalised for Havant with a bullet header which was enough to earn the home side a share of the points.

The last time these two teams met was on Boxing day in a very disappointing scrappy encounter at West Leigh Park which saw no goals.

Very few chances were created from both sides and it was Jamie Brown who came closest with a header moments before he got substituted in the 24th minute after receiving a yellow in the fourth minute.

The game needed a goal to settle things, however with few chances created both keepers Jack Dovey and Lyall Beasley spent most of the time watching the match with very little to do all game.

Graeme Montgomery came the closest to putting The Spitfires in the lead but his low driven show narrowly went wide.

Captain Tom Jordan was sent off for two bookable offences moments after Jamie Slabber had a penalty appeal turned down by referee Adrian Quelch.

The match finished 0-0 which meant it was the fourth time in a row Eastleigh have come away with a point from West Leigh Park in a game that could easily be forgotten by both teams.

The last time this derby was played at The Silverlake Stadium, The Spitfires triumphed The Hawks with a 4-2 win last season.