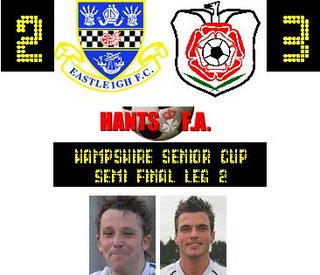 Eastleigh crashed out of the cup as they conceded to a late Warren McBean super strike. After going down 0-2 in the first half, Eastleigh fought back tremendously to bring the tie level once more just as they had done in the first leg – but this time they were beaten with an 89th minute winner which was Warren McBean’s second goal of the game.

In the opening stages of the game Eastleigh looked impressive. Inside the first minute Dave Town went on a dazzling run from outside the eighteen-yard box but as he bore down on goal his touch took him away from goal. The ball eventually found Ashford on the left wing he whipped in a great cross for Danny Smith in the centre whose glancing header flashed across the face of goal and out for a goal kick.

After this somewhat explosive start from the home side it was now Farnborough who were beginning to strike.

Carl Gibbs, the Farnborough number 9, used his speed to sprint past two Eastleigh defenders before being robbed of the ball by Rob Marshall’s inch perfect tackle.

In the ninth minute the visitors took the lead. A cross came in from the right hand side and as Steve Forbes rushed in to try and send the ball out for a corner it ended up in the top right hand corner of his own goal leaving Wayne Shaw with little chance to do anything about it. It was unfortunate for Forbes but it does happen in football, this was all that Farnborough needed to give themselves a boost and a platform to build on for the rest of the game.

Eastleigh began to threaten once more in the sixteenth minute. A Dave Town knock down was met by a first time volley from Danny Smith and the right-footed effort looked destined for the goal but it dipped and ended up inches away from the equaliser.

Only three minutes later, David Hughes threaded a perfect pass around the back of the Farnborough defence to find the run of Andy Forbes on the right hand side of goal. He found himself unmarked but he waited a little too long to get his shot in and as a result Andy hit the ball directly at the oncoming Kevin Scriven in the Farnborough goal and out it went for an Eastleigh corner.

A free kick from the half way line came into the Eastleigh box and McBean rose highest to meet the ball with a header that hit the foot of the post and despite Shaw’s best efforts the ball rolled over the line and went in. 2-0 to Farnborough.

The only other chance Eastleigh had was a pile driver from Ashford that was saved with ease by Scriven.

Eastleigh came out in the second half with seemingly more will power and determination to get back in the game.

Good work from the two Eastleigh front men nearly gave the home fans something to cheer about with only four minutes of the half been played. Dave Town closed down really well to nick the ball off the defender and at the same time he set up Andy Forbes to his right who pulled the trigger only to be denied by a reaction save from the keeper who palmed the ball around the post for a corner.

The tie came alive once more in the 58th minute. Danny Smith went on a surging run from the centre of midfield all the way into the Farnborough penalty area, it looked as though he was brought down but it didn’t matter because the ball fell loose and Dave Town was in the right place at the right time to tap home from six yards to give Eastleigh a way back into the match.

After a bit of panic in the Eastleigh goal area where there was a goal mouth scramble, Doswell’s men counter attacked and tried to catch out Farnborough on the break with Dave Town playing a good ball to Ashford whose low cross nearly found Andy Forbes at the back post.

New signing, Richard Hodgson replaced Jack Smith, who incidentally had a fantastic game at right back, as Eastleigh looked to have more options going forward in search of an equaliser.

Another good spell of pressure from Eastleigh saw two consecutive corners in a row, which were both met by good efforts from Town before being cleared. David Hughes also had a shot on the turn that was blocked well.

Eastleigh stepped up another gear as the game went into its final quarter. A Danny Smith header in the middle of the park played in Andy Forbes who only had the keeper to beat and with the goal gaping his shot went straight at Scriven.

The substitution for Eastleigh paid off, the excellent run of Richard Hodgson in the 80th minute led to him being brought down in the box. Andy Forbes stepped up and coolly slotted the ball into the bottom right hand corner to make the scores even and from here it looked as if Eastleigh would at the very least hold on for penalties as they were playing so well and were in command for virtually all of the second half – but it wasn’t to be.

A wonder strike from McBean picked out the top corner of Wayne Shaw’s goal to burst all bubbles of hope for the home side. The strike was so good I doubt even two or three keepers would have saved it. But the harsh reality of it is that is was against the run of play and just when Eastleigh fought their way back into contention they were hit with this killer blow to send them out of the cup.