Winchester City FA Vase winners Danny Smith and Andy Forbes were up against their former side in this annual pre-season friendly match, as Eastleigh fielded a strong line-up and came through the game with a decent work out and the right result to boot.

Ian Baird, who interestingly enough was named on the substitute’s bench for the visitors, didn’t have to wait too long for the first goal of the afternoon. 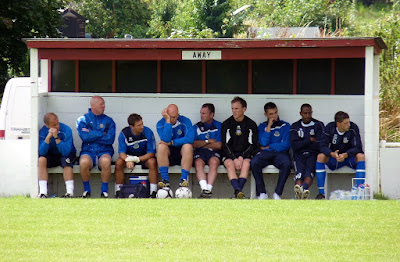 Ian Baird takes his place in the Eastleigh dugout... as a substitute!

With just four minutes on the clock, a long throw from the right saw Tom Jordan nod the ball into the centre. PETER ADENIYI, who was operating in the unfamiliar role of centre forward, stroked the ball low into the corner of goal to open the scoring from close range as the visitors got off to a flyer.

Shaun McAuley in his second game for Eastleigh following an impressive debut at AFC Totton on Tuesday night, forced a corner soon after, which was headed into the danger area by Forbes with a looping effort that had to be tipped over the cross bar by the alert goalkeeping of Chico Ramos.

City were forced on the back foot again with a second successive corner from the Spitfires, which saw Forbes fire narrowly wide of the mark.

In the 10th minute, Tom Jordan was fouled just outside the penalty area by Nathan Peprah Annan to give Brett Poate the opportunity to have a go at goal from the resulting free kick. The former Havant & Waterlooville left-sided player, who was operating in the centre of midfield this afternoon along side Smith, went for goal from 25-yards out and saw his effort deflected just wide of the keeper’s right hand post.

Eastleigh goalkeeper Dan Loader, who is currently on trial and training with the club had a very uneventful first half without a save of note to make. It was his huge goal kick however that created a chance out of nothing for Eastleigh as the City back line were caught out by the awkward bounce and Andy Forbes showed great movement to get to the ball first and try a first time lob over the on-rushing keeper only to see his shot drift off to the left of goal.

McAuley delivered a dangerous cross from the right in the 25th minute that took a vital punch from Ramos to take the ball away from Peter Adeniyi who was poised to head home.

A minute later, an acrobatic volleyed cross from Forbes fell at the feet of Adeniyi but the towering midfielder blazed high over the bar under pressure following neat approach play from Eastleigh.

Eastleigh continued to take the game to City, who struggled to contain their Blue Square South opponents, as McAuley’s header was kept out from a left flank Trevor Challis cross.

The Spitfires doubled their lead through centre back AARON MARTIN as Forbes rose highest at the back post to head the ball across the face of goal and into the path of the youngster who nodded home into an unguarded net. 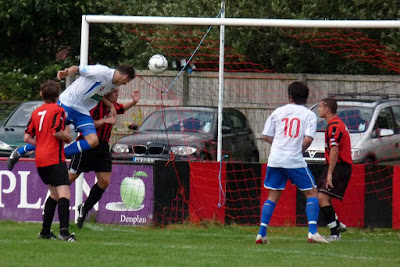 Brave defending from the Winchester captain Peprah Annan blocked a Forbes strike but in so doing, diverted the shot to send the keeper the wrong way. Ramos reacted superbly by re-adjusting his position in a split second and keeping the ball out with a fine save.

Before the break, Eastleigh showed excellent passing, possession football just as they had throughout the afternoon, and on this occasion Danny Smith played a one-two with Adeniyi whose deep cross from the near side was just an inch too high for Oliver. 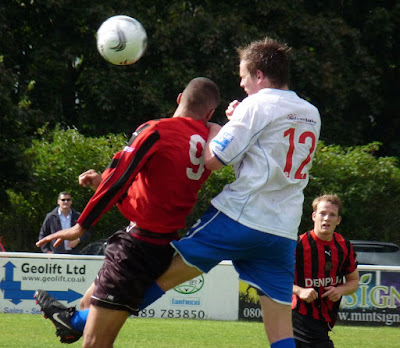 Sam Doswell gets the better of McEnery in the air

During the interval, Eastleigh made two changes with Sam Doswell replacing Aaron Martin and Shaun McAuley making way for Richard Gillespie. In the mini re-shuffle, Peter Adeniyi dropped back into his natural central midfield position and Poate moved out to the right wing.

Immediately Gillespie so nearly found himself through on goal though City’s substitute keeper raced off his line well to cut out the danger.

The conditions changed dramatically with showers and sporadic heavy downpours of rain in the second half as opposed to the bright sunshine in the first. One thing that didn’t change however was Eastleigh’s domination of the game as they continued to keep the ball in City’s half and create chances, albeit with less luck in front of goal.

Ten minutes into the half the Spitfires conjured up a fine move with Adeniyi combining to good effect with Forbes. Forbes nutmegged the Winchester skipper and former Dorchester Town centre half Nathan Peprah Annan, but delayed his shot finding himself with too much time and space in front of goal and went for power only to fire straight at the keeper Stacey Harper, who did well to beat the ball away.

Forbes troubled his former side once more minutes later as he glanced a Brett Poate free kick wide of goal with the header.

The Spitfires continued to make better use of the ball and enjoyed the majority of possession as most would have expected at the beginning of the game, whilst City were lucky to escape with the visitors having shots flash narrowly wide in quick succession.

Gillespie then fought off Peprah Annan on the far side showing great strength and composure before sending over an excellent cross into the centre that evaded Forbes by a matter of inches.

Eastleigh came even closer in the 71st minute when a perfect free kick delivery from Poate was met by an angled header from Forbes, blocked by the keeper and scrambled away off the goal line. 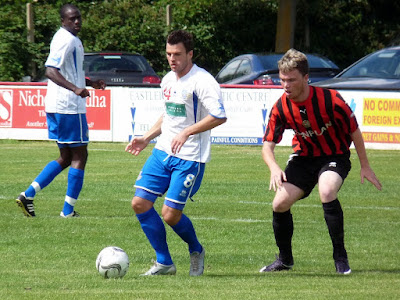 Andy Forbes on the ball

Pleasing to the eye, Eastleigh worked the ball around sharply with control, pace and precision down the left hand side with the tireless Danny Smith slipping in the killer final pass into Gillespie to create a glorious opening and split the City defence in two like a hot knife through butter. The former Bashley forward had a great opportunity to round the move off but his first touch let him down on this occasion and was the only thing to deny Eastleigh extending their lead to three goals.

Winchester did show signs of improvement towards the end of the game after being mere spectators for large spells and had their best opportunity come and go with 13 minutes remaining.

A long ball forward saw the ball evade Tom Jordan and roll through to the keeper, Dan Loader, who in turn sprinted to the edge of his penalty area only to spill the ball right at the feet of Leon Osei. With the ball there for the taking, Osei could not take advantage of the error and Loader’s blushes were thankfully spared when he clutched at the ball gratefully at the second attempt.

Nine minutes from time, Smith worked the ball across to Poate who couldn’t get any control on his shot from 18 yards that flew high over the cross bar, before Osei displayed glimpses of attacking threat in the closing stages for Winchester.

It was to be Eastleigh’s game as they ran out deserved 2-0 winners ahead of their Monday night showdown against Portsmouth. 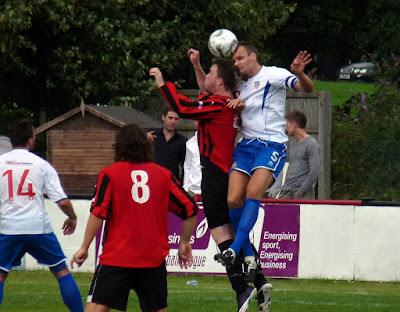