Premiership Pompey prove their class as Nugent bags a hattrick 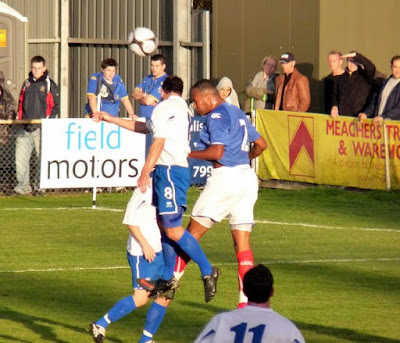 Eastleigh were delighted to welcome Premier League side Portsmouth to the Silverlake Stadium this evening as a pleasing crowd of 1,401 turned out to see this pre-season friendly.

Newly appointed manager Paul Hart (now on a permanent basis following a spell as caretaker boss), watched on as his side made a flying start to the proceedings with the visitors racing into a 2-0 lead inside the opening ten minutes.

First though, Daniel Subotic turned his man inside out with a turn that created room for a shot, only to fire high over the bar as early as the second minute.

The attacking flair from Pompey continued as a well-constructed move resulted in Subotic’s perfectly flighted cross to the far post was met by a Paris Cowan-Hall downward header that had to be beaten away for a corner by Eastleigh goalkeeper Jason Matthews.

From the resulting set piece, former Tottenham defender YOUNIS KABOUL powered a bullet header past the despairing dive of Matthews and into the net to bury Angelinus Basinas’ delivery and open the scoring.

This set the tone for the rest of the match in a sense and as it turned out the next goal was almost identical, or at least came in the same manner of a corner kick and simple headed goal.

The Spitfires found themselves 2-0 behind before they had even registered a shot of their own. Subotic made his presence felt in the Eastleigh penalty area to nod the ball down into the path of PARIS COWAN-HALL who applied the finishing touch from close range. Eastleigh will be asking themselves questions over the marking no doubt, as yet again Portsmouth were given room and made their opponents pay the price.

Cue the chimes of bells and the sound of drums ringing around the Silverlake Stadium as the Portsmouth fans lifted the atmosphere having taken a strong foothold on the game even at this early stage. 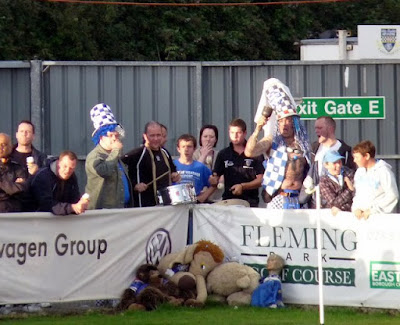 Cowan-Hall then drove a low shot across goal only for Matthews to get down and make the save following a clever reverse pass from Richard Hughes in the 19th minute, before two minutes later there was to be further bad news for the hosts.

Hopefully the sign of Andy Forbes being substituted prematurely (just 21 minutes played), was merely for precautionary reasons and nothing serious to worry about. It certainly doesn’t bode well for Eastleigh to lose their striker to a further injury set-back if indeed that does prove to be the case, just as he was beginning to come back and recover. Brett Williams was the man to replace Forbes.

Midway through the half, Portsmouth had the chance to make it three goals from three corners. Midfielder Gautier Mohoto hit a clean left-footed strike that was charged down well by Martin and deflected behind. Again Basinas sent a telling cross into the Eastleigh penalty area, and once more Subotic and Pompey had plenty of time and space at the back post only for a lack of control, which saved the Spitfires on this occasion.

Things went from bad to worse from Eastleigh’s point of view as DANIEL SUBOTIC was gifted a simple goal purely from a communication mistake and misunderstanding between captain Tom Jordan and his keeper Jason Matthews.

A long ball from the back was pumped forward and looked to be taken care of with no threat or danger in sight when Jordan got underneath the ball. However, his keeper had already sprinted towards the same ball and the pair met at the edge of the 18-yard box. Jordan had already headed the ball back towards the position Matthews had just vacated merely seconds before, and as the loose ball trickled towards the six yard box Subotic ran through, said “thank you very much” and capitalised on the blunder with the simplest of tap-ins to put Portsmouth three goals to the good.

Brett Poate was lucky to escape with a yellow card and his victim Basinas, even more fortunate to be able to continue after a heavy challenge soon after the third goal.

Experienced defender, Hermann Hreidarsson made a jinxing run into the box on the left hand side and looked to be making good ground but there was to be no escaping the attention and sliding challenge of young centre half Aaron Martin, who promptly put an end to the danger.

With what was Eastleigh’s first attempt of the evening, BRETT WILLIAMS found the back of the net with a goal of real quality. It was the first time the Spitfires had threatened going forward, but it was well worth the wait. Tony Taggart wrong-footed his marker on the left wing, came back on to his right foot before sending in an inch-perfect cross on to the head of Williams who did all the rest with a fine glancing header. There was to be no stopping this effort and for the Eastleigh fans, the goal at least was worthy of praise, provided cheer and even a glimmer of hope.

Three minutes before the break, Subotic clipped a half volley narrowly wide of the post as a cross from the right flank drifted in to the danger area.

Portsmouth held a 3-1 lead at the end of the first half.

In the 50th minute Cowan-Hall did extremely well to skip past two Eastleigh challenges including side-stepping Tom Jordan, making something so difficult look relatively easy as he continued on with the ball at his feet and unleashed a piledriver from the edge of the area that smashed against the inside of Matthews post. With the keeper beaten, the ball bounced away to safety fortunately for Eastleigh, though the skill and moment of inspiration from the Pompey youngster fully deserved a goal for the attempt.

Eastleigh did improve momentarily when Tony Taggart played the ball across to Peter Adeniyi who in turn teed the ball up for Poate. The former Hawk’s shot took a feint deflection and from the following corner, Azmir Begovic did well to punch the ball away but only as far as Taggart whose sliced half volley from 20 yards was just a little too high.

Four minutes shy of the hour, a square ball by Kaboul pulled up short and was cut out by the pace of Shaun McAuley, in his Silverlake Stadium debut, but having done the hard work to win the ball high up the pitch with the interception, the shot was blazed high and wide of the mark.

Portsmouth changed their entire side in the 61st minute, with a number of first team names with Premier League experience taking their place on the field including the likes of Sylvain Distin, Croatian flair player Niko Kranjcar, Papa Boupa Diop and Dave Nugent who went on to seal the game in comfortable fashion.

The visitors continued to threaten and take the game to Eastleigh as can be expected, with a whole side of fresh legs up against them.

Michael Green impressed for the hosts when coming on and playing on the left of midfield, but the visitors with their proven quality had just too much in their locker and their class shone through as the game wore on.

In the 77th minute, DAVE NUGENT after coming close twice already, was played in clear on goal from a lovely pass by Eugene Bopp, with the forward beating the offside trap and slotting past Matthews with a well-taken finish for 4-1.

Six minutes later DAVE NUGENT was on target once again for his second strike of the evening. Pancrete’s cross was turned home in style with a beautifully-executed volley from the former Preston North End striker that crashed in off the woodwork, leaving Matthews without a prayer to keep it out.

The game was rounded off in perfect fashion for DAVE NUGENT and Portsmouth at least, as the second half substitute completed a hattrick in just over ten minutes with a sublime finish. Kranjcar slipped the ball in behind the defence and from there Nugent chipped the ball delightfully over the head of Matthews with a classy touch to seal the rout at 6-1.