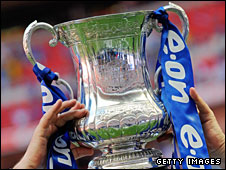 For the first time since Eastleigh (or Swaythling Athletic as they were know then) first entered the F A Challenge Cup competition in 1975 the Club have reached the First Round Proper and find themselves in a cup draw that includes names such as Leeds United, Southampton, Norwich City, Millwall and the list goes on. The only time their name had been in the draw before this date they still had a Fourth Qualifying Round replay to overcome, which they fell at that hurdle but they had then a home draw with Rotherham United. This time with no hesitation they will be in the draw on their own merit.

Eastleigh supporters were welcomed with good news from the start with Andy Forbes being declared fit enough to resume his striking role for the first time for five weeks. James Taylor and Jamie White found themselves on the Eastleigh bench as Aaron Martin returned to the side following injury, allowing Warren Goodhind to switch to a right back role and Danny Smith into a midfield position.

Smith and Anthony Riviere worked hard all afternoon to nullify any threat that the home side might throw at Eastleigh whilst Forbes and Richard Gillespie ran all afternoon to keep the Dover back four fully occupied. Dover themselves had selection problems and they gave a debut to ex-Eastleigh loan goalkeeper David Wilkinson formerly of Crystal palace, the keeper could not be blamed for any of the Eastleigh goals, some of the finishing of which was awesome.

It was a tense opening quarter of an hour with neither goalkeeper being tested though it was Eastleigh that held the upper hand. Eastleigh had justified their taking the lead on twelve minutes. Tony Taggart collected the ball midway in the Dover half, then continued to run at the Dover defence arriving at the edge of the box unchallenged before diving a low shot down past Wilkinson and into the corner of the net.

Within sixty seconds of the goal Dover had sprung themselves an attack but Lee Browning miscued in front of goal and the chance had disappeared. Browning had another attempt on seventeen minutes that saw Jason Matthews fully stretched to his right to save at the foot of the post.

Although creating more than in the opening stages of the game it was still against the run of play when Dover grabbed an equaliser on twenty-seven minutes. Nicky Southall’s free kick into the area was met by a punch from Matthews but the ball fell invitingly for Ollie Schulz to rifle home the Dover equaliser.

Eastleigh regained their lead five minutes later. Brett Poate lofted a free kick into the Dover penalty area where Pete Adeniyi headed the ball back across goal where a superbly controlled volley from Taggart flew past the rooted Wilkinson for an excellent finish and Eastleigh in front again. The game was building up into a proper F A Cup tie with the edge on both teams.

Shaun Welford shot straight at Matthews on thirty-four minutes then six minutes later Danny Walder had a deflected shot fall into the arms of Matthews. As the interval approached and Dover searching for their equaliser with a rapidly increasingly disgruntled home following behind them, built a good move including Browning, Welford and Southall before Walder fired the chance wide of the target.

Dover made a substitution at the start of the second period with talented winger Jerahl Hughes taking the field. The half was only ten minutes old when Tom Jordan rose in the six yard box to head home a Smith corner and give Eastleigh a two goal cushion.

Eastleigh were then on the back foot for a while. Hughes’ run and cross-ended with a glancing header from Adam Birchall going wide, followed by Schulz’s header from Walders free kick also just wide. Eastleigh got themselves some respite and a searching pass from Riviere set in Gillespie that saw Wilkinson quickly off his line to save at his feet.

Forbes, Riviere and Adeniyi all combined before the latter had an effort saved and the game was effectively over on the hour when Eastleigh added a fourth. Smith’s corner, Jordan saw his header this time come back off the post but Gillespie was not to be denied as he rammed the ball back over the line.

There were a few minor concerns for the Eastleigh following when Dover reduced the deficit to only two goals again on sixty-three minutes. Browning set through on goal coming from deep lofted the ball over the advancing diving Matthews for Dover goal number two. A minute later an excellent stop from Matthews denied Southall from reducing the deficit again. Southall saw another Matthews save deny him again a minute later though Matthews took three attempts to get the ball under his total control, Welford finally forcing the ball over the line but the referee Mr Nigel Lugg awarded a foul on the Eastleigh stopper much to the disagreement of the Dover side and supporters.

Taggart had another run at the Dover rearguard and then a shot that was saved by Wilkinson and the keeper quickly put the ball back into play allowing Dover to amount yet another attack. A cross into the area from Walder was met by the head of Welford, the ball being blocked by Goodhind which had the large Dover crowd in uproar again as appeals for a penalty were turned away by Lugg.

Substitute Shaun McAuley had an effort saved by Wilkinson before Eastleigh added their fifth goal on seventy-nine minutes. Another threaded Riviere pass allowed McAuley in behind the Dover defence. McAuley’s left wing run ended with a ball across the face of goal, which was turned home by Forbes just to erase any concerns that may have been lingering.

The 1161 attendance saw a mass exodus away from the stadium at that point. For Dover matters only really got worse. Player Manager Andy Hessenthaler brought himself off the bench for the last quarter of an hour but the 44-year-old ex-Gillingham midfielder only last on the pitch six minutes before he was shown a red card by referee Lugg following a challenge on Taggart.

McAuley saw another effort dragged wide of the target and Brett Poate had a free kick blocked by a Dover defensive wall, though the game was really playing out time.

There was still time though for a third Dover goal. Four minutes of stoppage time had been played when Matthews brought another flying save from a Welford header, the ball springing from the keeper’s hands bouncing up onto James Taylor, back defending for a corner. Lugg adjudged the ball had struck Taylor’s hands and awarded Dover a penalty. Birchall slotted home the penalty but there was only just enough time for the referee to restart the game before ending the contest and sending Eastleigh into the F A Cup First Round for the first time in their history.