Spitfires see off Dragons in the FA Cup

A confident performance from Eastleigh saw Ian Baird’s side dump neighbours and Blue Square South rivals Basingstoke Town out of the FA Cup and seal a place for the Spitfires in the next round.

Having scored twice at Havant & Waterlooville’s Westleigh Park in the league last weekend to salvage a point, in-form striker Richard Gillespie netted the opening goal of the afternoon today for his fourth goal in three games.

Jamie White was handed a starting place after signing on a month’s loan from League One side Southampton in midweek, meaning Tony Taggart had to make do with a place on the substitute’s bench.

Captain Tom Jordan returned to the side having shrugged off an injury in the only other change to the starting line up from the side that drew 2-2 at Havant seven days ago.

In the opening stages of this cup tie, Anthony Riviere was particularly outstanding winning the ball several times as the energetic midfielder dominated the battle in the middle of the park.

A low cross from the equally impressive Danny Smith, who is coming into his own in the right back position, was well cut out by the Basingstoke defence ahead of James Taylor, who was up against his former side.

With twelve minutes played, White showed the Eastleigh faithful their first glimpse of the kind of quality the diminutive forward/wide player possesses. Finding that little bit of space down the left hand side, the 19 year old left his marker behind before delivering a quality cross. Unfortunately for the home side, Richard Gillespie couldn’t quite bring the ball down to take advantage.

Eastleigh forced a corner in the 17th minute, and from it broke the deadlock with a top-drawer set piece right off the training ground. Brett Poate’s in-swinging corner kick from the near side was nodded on expertly by Peter Adeniyi right into the path of RICHARD GILLESPIE who charged in to head the ball home from close range to continue his rich vein of form in front of goal. 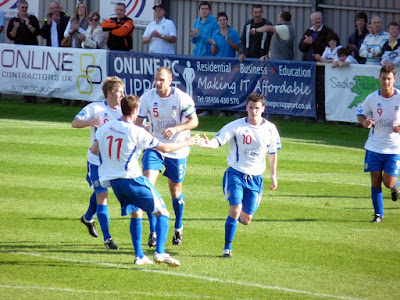 The Dragons’ goalkeeper Ross Kitteridge, who played for Eastleigh on loan a couple of seasons ago, rushed out of his area soon after conceding the goal and couldn’t prevent a second successive Eastleigh corner in a matter of minutes. This time Poate’s tricky delivery evaded everybody in the crowded penalty area but struck a well-placed defender on the goal line who denied an otherwise certain second Eastleigh goal.

Eastleigh continued to press by getting the ball into the box at the earliest opportunity and keeping their opponents on the back foot for large parts of the game.

Tom Jordan lofted a high ball into the danger zone which was only half cleared and fell to the feet of Anthony Riviere, whose shot from 18 yards was deflected wide. Peter Adeniyi then crossed from the right flank but this time when the ball into the area sat up, Kitteridge rose high to claim safely.

On the half hour, Shaun McAuley and Jamie White switched wings, with Eastleigh’s latest recruit White now operating on the right hand side.

The game suddenly became fairly stop-start with Basingstoke’s players picking up knocks and regularly in need of treatment. Meanwhile target man James Taylor continued to win most of the headers in the air that came his way alongside the lively Gillespie who never gave the ‘Stoke defence a moments peace.

At the back Eastleigh were well organised with a high defensive line and Aaron Martin back to his dominating best along side Jordan, Poate and Smith who all contributed to giving goalkeeper Jason Matthews a quiet afternoon to enjoy without a save of note to make. 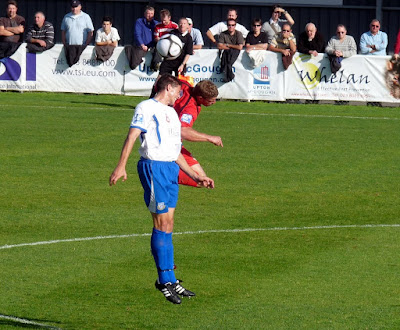 In the middle of the park Riviere and Adeniyi won the midfield battle whilst White and McAuley provided good width.

Eight minutes before the break, a deep free kick from the hosts was flicked on by Jordan and met by a sublime diving header and into the net… only it was a Basingstoke defender who applied the clinical finishing touch! The whistle spared the Dragons’ blushes and a contender for own goal of the season as the referee spotted an earlier infringement and the score remained 1-0 to Eastleigh.

Basingstoke did improve momentarily as half time approached but Aaron Martin stood up well to defend a dangerous free kick by hooking the ball away with a good clearance.

The last of the first half action saw Matthews make his first save of the game from the visitors first shot of the afternoon. Jahson Downes skipped past Jordan and squeezed his way into the penalty area before hitting a low driven shot that was blocked well by the feet of the Eastleigh stopper.

Eastleigh made their first change by introducing Andy Forbes for James Taylor in the 55th minute.

Another flash of brilliance from Jamie White saw Eastleigh on the front foot in the opening stages of the second half as his sweetly executed clipped pass over the top of the Basingstoke defence created a good opening for Baird’s side.

Richard Gillespie latched on to the pass but fired comfortably wide of the mark opting to take the ball early with a half volley.

Two minutes shy of the hour, Danny Smith sent a free kick from the left into the goal area. Ross Kitteridge went up for what looked like a routine catch, but just when players were starting to re-shape thinking the ball was safely in the hands of the goalkeeper, the ball somehow ended up in the back of the net and Eastleigh were celebrating a second goal.

Kitteridge was having a poor spell which wasn’t getting any easier thanks to the constant threat from the Eastleigh strike force.

Barely a minute after the misfortune of being credited with an own goal, the Basingstoke keeper so nearly conceded a third goal as Andy Forbes charged the ball down sensing the nerves of Kitteridge. Forbes won possession in front of goal and crossed for Adeniyi who in turn teed up Richard Gillespie. The ball sat up perfectly for the forward who smashed the ball home with a clean left foot volley, though for the second time in the game, Eastleigh had a ‘goal’ disallowed for a supposed foul.

Shaun McAuley made way for Tony Taggart and the substitute was quick to make his presence felt. Cutting in from the right and back on to his left foot, Taggart delivered an inch-perfect cross which Gillespie met with a header that looked destined for goal from point blank range only for a slight deflection to see the effort behind for a corner as Eastleigh assumed full control.

In the 71st minute, Gillespie was in the thick of the action once more. Having got the better of his marker in an aerial battle from a long kick up the field by Matthews, the ball rebounded kindly into the feet of the ex-Bashley hot shot who still had an awful lot to do but made up ground running from the halfway line and bearing down on goal. The willing runner lost a second defender for pace and by feinting left and then right to open further space in front of him but just when he had done all the hard work Gillespie lost his balance and footing at the crucial moment and Basingstoke were able to survive another scare.

David Pratt fired comfortably off target for the visitors at the opposite end before Jamie White was replaced by Ian Oliver for the Spitfires.

Pratt then volleyed clean over the bar with eleven minutes remaining, though after this there was once again only one team in it.

Brett Poate struck a fine free kick from 30 yards out that curled just inches away from the top corner after Riviere rolled the ball to his left and Taggart stopped the ball dead for the ex-Hawk to strike goal wards.

In a frantic spell inside the Basingstoke penalty area, Eastleigh were left wondering just how they didn’t increase their advantage. Anthony Riviere struck the post before Andy Forbes smashed a volley from 8 yards that resulted in an instinctive reaction stop from Kitteridge. Eastleigh could have scored about four goals in the space of 30 seconds – it was like a game of pinball with several shots being fired towards goal only to come back each time either with a rebound off the wood work, the keeper or a defender!

The Spitfires appeared to be cruising and created one of the best moves of the game with time running down. Peter Adeniyi lifted the ball over a defender in the style of a Brazilian into the path of Ian Oliver who crossed early to pick out Gillespie in the centre. The hard-working forward brought the ball down beautifully before firing a powerful volley towards goal all in one swift movement that once again had to be kept out by a Kitteridge parry.

Ultimately Eastleigh sailed through into the next round of the competition at the expense of their neighbours and were extremely unfortunate not to have scored more goals that their general all round play deserved so much. 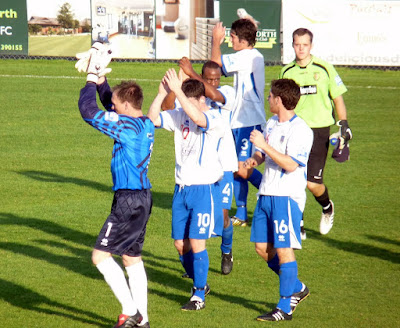