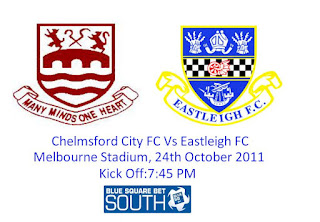 Ian Baird's Spitfires are playing sixth-placed Chelmsford City tonight away in the Blue Square Bet South at the Melbourne Stadium.

Eastleigh will come in to this game in good spirits after a fantastic 3-0 league victory over second in the league Welling United on Saturday.

On loan Michael Green, from nPower League 2 side Port Vale, made a instant impact on his return to the Silverlake Stadium. The 22-year-old left back had a solid game and opened the scoring with a twenty-yard low drive on goal.

With the Wings down to ten men, Ian Herring set up Sam Wilson's second half replacement Jordace Holder-Spooner on a run forward. The ex-Saints academy prospect did very well to set up Richard Gillespie with a fantastic back heel. Gillespie thumped home his first goal of the season with a cool finish.

On loan winger Graeme Montgomery, from nPower League 2 side Aldershot Town, then went on a run of his own displaying neat footwork before finding the net in style to complete the scoring.

At the weekend the Clarets managed to win 0-1 away to Salisbury City in the 91st minute thanks to captain Adam Tann, who scored the winner.

Clarets fans received bad news last Wednesday when popular winger Anthony Cook was ruled out for the rest of the season following a ruptured cruciate ligament.

Chelmsford City are unbeaten since Saturday 3rd September when Dover Athletic beat them at home 2-3. The Clarets have won three and drawn three since they played Dover Athletic.

The last time these two teams met at the Melbourne Stadium was last season in August 2010. The Spitfires lost 3-0 with Warren Goodhind getting sent off after fouling Anthony Cook in the penalty area. David Rainford converted the penalty.

Rainford scored another penalty shortly after when Chris Holland (now at Havant and Waterlooville) brought down Ricky Modeste in the area.

Takumi Ake then went on a unstoppable run and finished with a powerful shot on goal to make it 3-0 to the Clarets on that occasion.

The Spitfires got their revenge seven months later when they ran out 2-1 winners at the Silverlake Stadium.

Captain and centre back Tom Jordan put the Spitfires in front with a fantastic chip that a striker would be proud off, to put Eastleigh in front after just ten minutes.

In the second half Jamie Slabber doubled Eastleigh's lead with a great header from a Richard Graham cross.

David Rainford scored yet another penalty that season against Eastleigh.