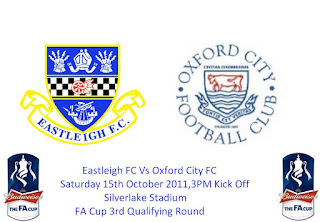 Ian Baird's Spitfires will try to get in to the hat on Monday for the FA Cup 4th Qualifying Round draw and bag themselves £7,500 as they play second placed Evo-Stick Southern Premier League side Oxford City, home at The Silverlake Stadium (3pm kick Off).

The City have got off to a flyer this season having won eight of their twelve league games losing only twice (one of which was 6-0 away to AFC Totton) and have won their last four games away.

Oxford City have played two rounds of the FA Cup so far this season - against Didcot Town 1-1 where they went on to win the replay 3-0 away. In the next round Oxford came up against Thame Unted (two leagues below Oxford City) where they won 3-1 away.

The Spitfires have only played one game to get this far having beaten Cinderford Town 3-1 at home.

Some of the first team players were involved in Tuesday's Hampshire Senior Cup game against Aldershot Town including Billy Tsovolos, Jordace Holder-Spooner, Shaun Wilkinson, Sam Wilson, Andrew White, Ryan O'Hara and Ian Herring who captained the side; however The Spitfires still lost 4-1 against a good Aldershot side.

The Spitfires' last league game ended in a 3-0 away defeat at Eastbourne Borough on the same day when Oxford City thrashed Swindon Supermarine 7-1 at home, where ex-Saint Steve Basham scored four goals.

The last time these teams met was in a pre season friendly earlier this year and The City won on that occasion 2-0 with Felipe Barcelos and Jimmy Deabill both on the score sheet.

Eastleigh FC announced coming in to this game that Assistant Manager Kevin Braybrook has left the club, a press release was placed on the official website this morning by Eastleigh director of football Dave Malone