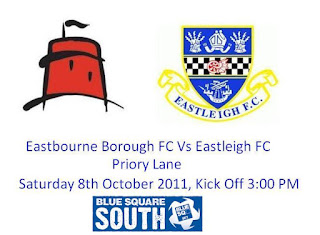 Ian Baird's Spitfires will be in search of a third straight win in all competitions when they travel to Eastbourne Borough on Saturday at Priory Lane.

However, it will be a difficult challenge for Eastleigh against a side nine places higher in the table with five more points than Eastleigh's.

Eastleigh come in to this game with an FA Cup win under their belts. The Spitfires won comfortably against Cinderford Town 3-1 in the FA Cup Second Qualifying Round last weekend.

Andrew White came on in the second half to complete the scoring towards the end of the game. His initial lobbed effort on goal was saved only for the former Reading striker to pounce on the rebound and find the back of the net.

There was still time for further drama with Cinderford's captain Dale Evans receiving a red card before the Forrester's scored a consolation goal.

Eastleigh's reward for winning the tie is another home game in the next round when they will host Oxford City next Saturday at the Silverlake Stadium in the FA Cup Third Qualifying Round.

The Sports (Eastbourne Borough FC), like Eastleigh played a team two leagues below them in the FA Cup where they faced Waltham Forest; however it took then seventy minutes to break the deadlock.

Gary Elphick headed home the opening goal, with Ben Watson and Carl Rook securing a solid win for The Sports.

The last time these two teams met was in a pre-season friendly in August 2010 at The Silverlake Stadium where Eastbourne Borough won 0-4.

Eleven of the players involved in that match still play for Eastbourne now whereas only seven remain from the current Eastleigh squad.

The last time these two teams met at Priory Lane was in the 2007/2008 season where it finished 3-2 to Eastbourne Borough. Jamie Brown (Eastleigh), Darren Baker and Matt Crabb (both Eastbourne Borough) are the only players who remain in the squad for tomorrows game.

The game before at The Silverlake Stadium in the same campaign saw Eastbourne Borough win 1-2. Andy Forbes (who is likely to be in the squad for tomorrow's game) scored the only goal for Eastleigh.

The Sports gained promoted from the Blue Square South that season after winning the play-off's. Eastbourne's time in the non league top flight lasted three seasons after suffering relegation in the 2010/2011 season back to the Blue Square Bet South.

The last time Eastleigh managed a point against The Sports was in the 2006/2007 season where it finished 1-1 at the Silverlake Stadium.

Sam Wilson will not be in the Eastleigh squad tomorrow after impressing Premiership outfit Fulham. The young striker has been asked to come back and play in a trial game on Saturday after training again with the club on Thursday and Friday.

This is a big game for Eastleigh so roar on those Spitfires at Priory Lane tomorrow. 3pm kick off.