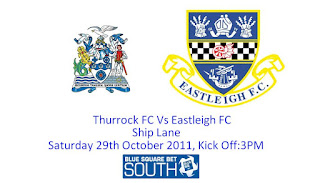 Eastleigh's loan of young goalkeeper Jack Dovey from nPower Championship side Southampton is a boost for Saturday's Blue Square Bet South game away to Thurrock at Ship Lane. It will no doubt give Ian Baird a tough decision whether to keep Gareth Barfoot in goal and adds competition for the number one jersey.

The Spitfires were shocked on Monday night when Chelmsford City hit Eastleigh with three good goals in the first twenty minutes.

Greg Morgan opened the scoring for the Clarets in the 8th minute with a well taken goal. Four minutes later captain Adam Tann put the home side two goals up with a great header.

Aiden Palmer completed the rout with a corner that went straight in off the cross bar. Eastleigh managed to keep the Chelmsford attack out for the rest of the game, however the damage was already done.

The Spitfires will try and forget that night when they play the Fleet tomorrow afternoon. Thurrock are the lowest goal scorers in the league but Eastleigh have only scored one more goal than the Fleet this season.

The Fleet have signed 'The Only Way Is Essex' star Mark Wright in time for the game. The former Southend United defender has been at a number of non league clubs including Crawley Town and Bishop's Stortford.

The last time these two teams met at Ship Lane, the match finished 2-1 to Thurrock with Jamie Slabber opening the scoring.

Goals from Kenny Clarke and Jamie Richards from the penalty spot ended Eastleigh's unbeaten run of twelve games and a six game winning streak in 2010/11.

The Spitfires got their revenge three months later when they won 3-1 at the Silverlake Stadium.

Chris Holland (now at Havant and Waterlooville) opened the scoring on that occasion with a great strike on goal.

Captain Tom Jordan then doubled Eastleigh's lead with a close range effort to put the Spitfires 2-0 up.

Lee Boylan then got one back for the visitors only for Tony Taggart (now at Sutton United) to score the third for Eastleigh with a great half volley.

The Fleet lost their last home game 0-3 on Tuesday night, and have not won at home this season managing to pick up just two points at Ship Lane.