Realist Hill will stick with what he's got 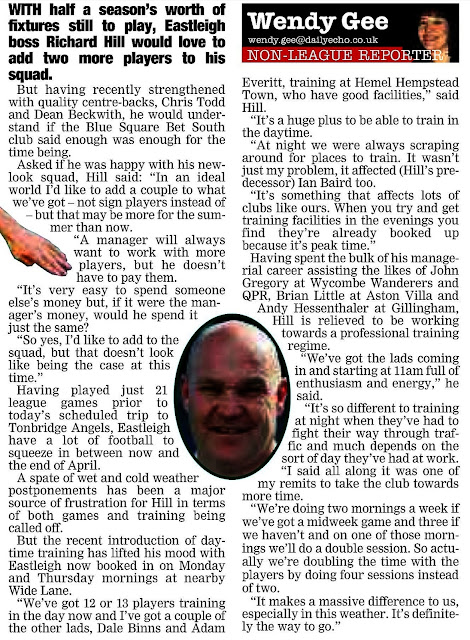 Eastleigh are pleased to announce that having managed to stave off offers from other clubs, the ink is still drying on the contract for the capture of midfielder Will Evans from Hereford United. Evans finished last season on loan at Football Conference Premier Division side Newport County helping them gain promotion back into the Football League, Eastleigh just await the international clearance certificate for the player. Evans played for Fairford Town and then hometown club Cricklade before signing for Swindon Town and progressing through their Centre of Excellence. Having signed his first professional contract in April 2010 after captaining their youth and reserve sides he made his professional debut in a 3-0 Football League Trophy victory at Southampton in August 2010. After spending three months on loan at Hereford United where he made six appearances, Will signed permanently for them in January 2012 on a free transfer. A year later he joined Newport County on a loan deal t
Read more

- May 04, 2013
EASTLEIGH 2-0 DOVER ATHLETIC  (3-3 on aggregate AET, Dover win 4-2 on penalties)   Saturday 4th May 2013 Blue Square Bet South Play-off Semi Final 2nd Leg Match report by Paul McNamara After such a heart-breaking conclusion to a magnificent Eastleigh display here in Dover, the overriding emotion of all involved with the defeated outfit might be expected to be one of utter devastation. The predominant word used by travelling Spitfires to describe their post-match emotion however, was pride. Eastleigh’s players, and management alike, were near perfect in their attempt to scale the mountainous peak that was placed in their way by Tuesday’s 3-1 defeat in the first-leg of this play-off. That game has already been pored over, and indeed, it has ultimately proved the occasion on which this team’s promotion hopes suffered their fatal blow. The Spitfires gave a performance from the outset of today’s encounter that was a much fairer reflection of the group of
Read more