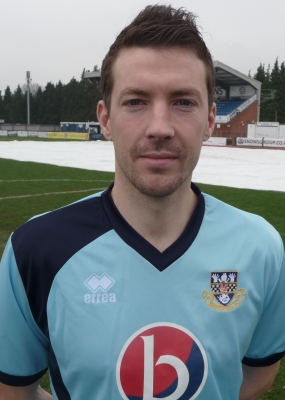 Spitfires boss Richard Hill commented: “I am delighted that we have been able to persuade Chris to join us, again just like Dean (Beckwith) I have been after Chris for a while and he was in high demand.

“He had a number of options from clubs in the Conference Premier and for him to choose Eastleigh speaks volumes for the club and I am looking forward to working with him.

“I think the signings we have made this week will help make us become a more solid unit and I am sure the opposition will have to work far harder against us than they have had to in recent weeks.

“Chris is a great lad and a superb character that has come here with a lot of ambition and I am sure he will prove a popular figure with the fans.”

Born in Swansea Chris began his career with his homeclub Swansea City before joining Exeter City in 2003. The 6 foot central defender played over 150 times for The Grecians before joining Torquay United in 2007 where he quickly became a regular and helped them regain there league status in the play off final. After a successful loan spell at Newport County, Chris made the arrangement permanent and went on to make over 50 appearances for the South Wales club.

Todd arrived at Forest Green in May 2011 in what manager David Hockaday described as a “major coup”. However, a hamstring injury on his debut against Stockport County kept him out of action for most of the 2011-12 season, and further defensive signings for the 2012-13 season have restricted opportunities for the popular defender.

Rovers manager David Hockaday said on the Forest Green website: “Toddy’s a super lad and we wanted to do well by him; anyone who joins Forest Green will be looked after.

“We’ve helped him get a deal at Eastleigh and he’s under contract and sorted for another 18 months.

“Toddy was unfortunately a victim of circumstance. He got that injury against Stockport in the first game of last season and by the time he was fit again, other players had established themselves.

“Toddy’s a super pro, great in the dressing room and we’re delighted we could help him get another deal and get back playing regularly.”

Todd also overcame leukaemia in 2008, before writing and publishing a successful book, “More Than Football; In The Blood”, in 2011 about his experiences; more recently, he appeared in a Channel 4 documentary as part of a choir supporting the fight against cancer.

Chris will be available for selection this weekend for our home fixture against fourth placed Boreham Wood at the Silverlake Stadium on Saturday.